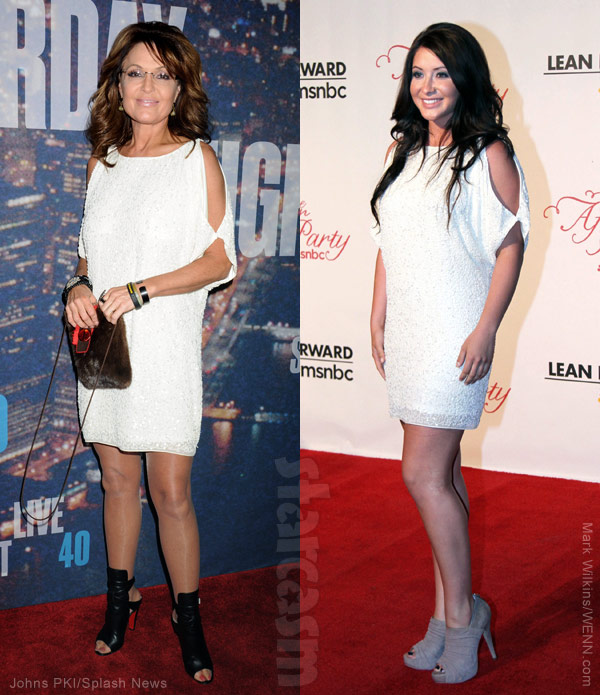 So who do you think wore the sparkly ivory mini dress better? (I have to concede Sarah is giving her daughter a run for her money! You betcha those shoes are fierce!)

While you ponder that fashionundrum, let’s take a look at Sarah’s part in the SNL special in which she shows she is a good sport by allowing Jerry Seinfeld to confuse her with Tina Fey before asking what her announcement as a Presidential candidate in 2016 might be worth to Lorne Michaels:

“I’m just curious, Jerry, how much do you think Lorne Michaels would pay me if I were to run in 2016?” Sarah asked Jerry during the interview skit.

“OK, just hypothetically, then — what if I were to choose Donald Trump as my running mate?” Sarah added.

And although you couldn’t tell from the video, Sarah was in good company in the audience as she was sitting beside none other than Taylor Swift! The two were captured in an official NBC/Universal photo that has since gone viral because of Taylor’s facial expression: 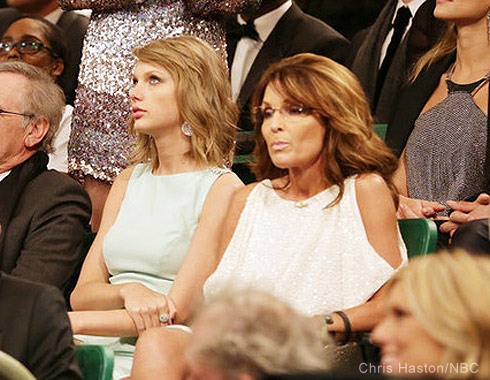 I don’t know, this seems like a picture taken a bit out of context — I don’t think Taylor was necessarily displeased to be sitting beside Sarah necessarily. It’s just another example of “Gotcha!” photojournalism. 😉

Teen Mom OG ratings continue to fall, is this the beginning of the end?