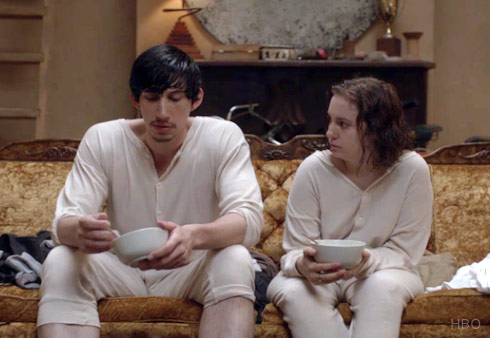 I don’t think many people would argue that the breakout star of HBO’s breakout comedy Girls isn’t a girl at all, but actor Adam Driver, who plays Hannah’s brutally honest (sometimes just plain brutal) and frightfully unpredictable boyfriend on the show. Girls has launched Adam into superstar status, and he is capitalizing with an incredibly busy 2015 that includes roles in highly anticipated films by notable directors like Noah Baumbach, Jeff Nichols and Martin Scorsese. Oh, and then there’s his part in J.J. Abrams’ Star Wars: The Force Awakens that you may have read about.

So, when Hannah returned to New York City from her brief sojourn in the world of Iowan fine arts academia and finds Adam with a new girlfriend, many viewers assumed that his days as a cast member might be numbered. Lena spoke with The Daily Beast and assures us this is not the case.

“He’s doing Star Wars so it would seem that way, but Adam’s not going anywhere,” Lena reveals. “I’ve had people come up to me trembling in the street saying, ‘How’s Adam going to do Girls and Star Wars?!’ But we’re figuring it out. We love J.J., so we spend a lot of time on the phone figuring out how to split custody of Adam.”

Lena also talked about this week’s very emotional episode after Hannah’s return in which she is forced to deal with the fact that Adam is moving on. “We’ve been playing an onscreen couple for almost four years, so even though we’re adult people—he’s married and I’m in a long-term relationship and we’re totally buddies—there’s something really emotional about letting go of that onscreen relationship,” she says. “It felt like the end of an era, at least for a moment.”

And that end of an era feeling impacted the entire set while filming the episode. From The Daily Beast:

“We shot that scene all day long,” says Dunham. “Usually, I’m joking with the crew in between takes, asking for snacks, and moaning, and this was one of the only times I stayed quiet and stayed in the moment because there was such a strong sense of emotion. Watching Adam experience it gave me everything I needed.”

She added, “Adam is such a real and powerful actor that sometimes looking at him emoting just makes me cry—watching someone display that awesome vulnerability. He’s also so giving. I didn’t understand what it meant to be a ‘giving scene partner’ until I met him. If you needed him to slice his arm and bleed for you to get you to nail the scene, he would do it. He’s so committed to getting what needs to be gotten.”

It’s great to hear that Adam will be staying on, although I’m not sure how much I will like his character alongside the restrained, seemingly level-headed TED talking sculptor Mimi-Rose Howard (played by Gillian Jacobs). On another note, it will be interesting to see how show creators are able to creatively keep Lena Dunham from maturing and becoming less narcissistic given her current bleak situation! I’m sure they will figure out a way.

PHOTOS: Taylor Swift’s 4th of July party was the place to be