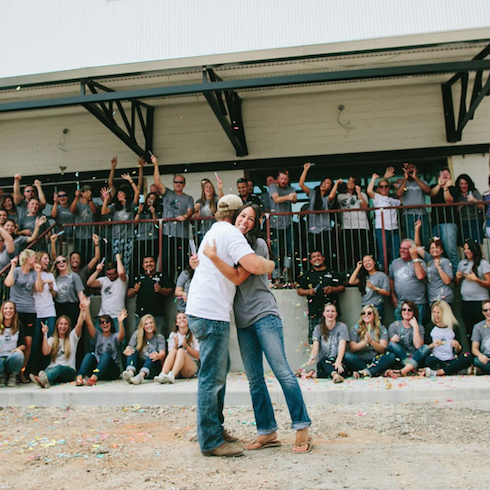 For the Fixer Upper crew, this past weekend marked the end of a year of hard work, hoping, work, planning, praying, hard work–and more hard work! What happened? Joanna and Chip Gaines officially moved their Magnolia Market into the new Magnolia Silos, and celebrated the occasion with a two-day Silobration!

Basically, downtown Waco was a giant Fixer Upper party this past weekend. Severe storms threatened to derail the celebration early on, but the worst of the weather passed Waco by, and, by Sunday, the strongest rains had stopped, as well. A whole host of bands–headlined by Tennessee-based blues duo Johnnyswim–provided musical entertainment; Chip rappelled into the festivities down the side of one of the silos (really!); and, from the looks of things, the whole scene was bursting with energy and good vibes.

So, without further adieu, here’s a photo- and videographic tour of the Silobration highlights!

It’s past all their bed times but I’m happy they are enjoying the new space at the silos. We look forward to seeing many of y’all tomorrow!! It’s gonna be a good one! #silobration A photo posted by Joanna Stevens Gaines (@joannagaines) on Oct 29, 2015 at 7:55pm PDT

A flashback to October 16, 2003 when we first opened Magnolia Market. I never wore red lipstick but I was feeling bold that day and tried it. I was extremely grateful for the forty customers that came in that day to support us. Now 12 years later I’m completely blown away. THANK YOU for all the support, we feel it and are so humbled and grateful! #silobration @magnoliamarket

WOW, these people in line are so joyful and happy to be here. We appreciate y’all braving the weather! #rainorshine pic.twitter.com/EWaIcKkUL6 — Magnolia Market (@MagnoliaMarket) October 30, 2015

Forgot your umbrella? Don’t worry! We have ponchos for you to keep dry tonight! #silobration #rainorshine pic.twitter.com/utMFi1zxde

The rain stopped and the #silobration was a night we will never forget. Thank you to all who travelled to be a part of this with us!! A photo posted by Joanna Stevens Gaines (@joannagaines) on Oct 30, 2015 at 9:05pm PDT

Why would you come out on stage like a normal person if you could do this? @chippergaines you’re a rockstar #hurtbackandall ?: @jessbarfield #silobration A photo posted by Joanna Stevens Gaines (@joannagaines) on Oct 31, 2015 at 9:07pm PDT

Abner dressed as @chippergaines for Halloween. What a fun night celebrating the @magnoliamarket silos! ?: @joannagaines #silobration A photo posted by Johnnyswim (@johnnyswim) on Oct 31, 2015 at 9:47pm PDT

We had so much fun. Thanks so much for everyone that came and @johnnyswim for killing it. We should do this every weekend. #nofilter #silobration

If you weren’t following the festivities on social media, don’t worry: you can still look forward to the official Fixer Upper rendition of the silobration. Since the whole event was filmed for the show, it’s only a matter of time before we see the Fixer Upper Season Three Silobration episode! And remember–you can catch all-new episodes of Fixer Upper starting December 1st at 9 PM EST.