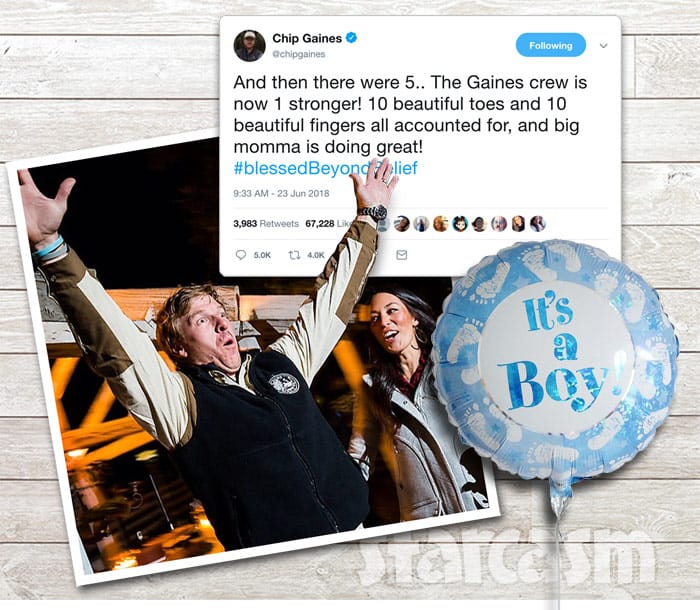 Congratulations are in order for the First Couple of home renovation as Fixer Upper stars Chip and Joanna Gaines have welcomed their fifth child!

“And then there were 5,” five-time pop Chip tweeted early Saturday morning. “The Gaines crew is now 1 stronger! 10 beautiful toes and 10 beautiful fingers all accounted for, and big momma is doing great!” he added, along with the #blessedBeyondBelief hashtag.

The birth comes just over five months after the HGTV stars announced Joanna was pregnant back in early January. Chip later revealed that the two were expecting a boy in a heart-warming gender reveal clip on Twitter back in early March. In that same clip, Chip also revealed that they were planning on naming the new addition with a moniker starting with the letter “D”, presumably to match his older brothers Duke and Drake. We still don’t know what name the couple finally decided on, but my money is on Demo. (Middle name Day of course!)

CONGRATULATIONS to Chip and Joanna! And congratulations on that little feller because he gets to join a beautiful family with just as much love as shiplap to go around!

We will monitor things and try to update when we have the actual name for and/or photo of Demo Gaines.

UPDATE – We have photos, LOTS of photos! And a name! it seems the couple had a change of heart about the “D” name and decided to go with Crew Gaines. I’m sure the people working on the show will appreciate it 🙂

Here are the photos and updates from mom Joanna:

Our baby boy, Crew Gaines, is here & we couldn’t be more in love. He made an unexpected (and speedy) entrance into the world two and a half weeks early – which is fitting given he was a sweet surprise from day one. Thank you for all your thoughts and prayers. We are so grateful. pic.twitter.com/AlREsEUMF1

One of my favorite pics a friend showed me after Crew was born. They couldn't wait to meet their new baby brother ❤️ pic.twitter.com/NvFvOFPK0p