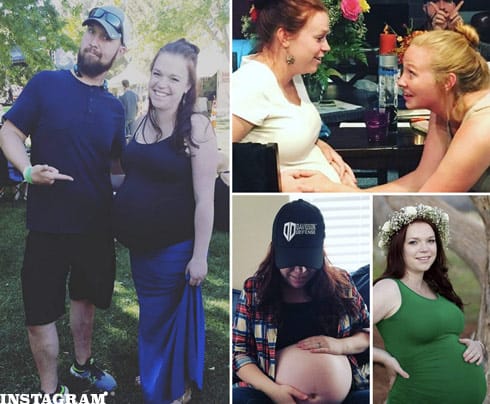 A very pregnant Maddie Brown has been keeping fans updated on her progress with a number of wonderful shares to Instagram. In late November the 21-year old and her husband Caleb Bush announced that they were expecting.

Maddie and Caleb, 30, who wed last June in a bohemain-themed ceremony, have discussed giving different names to the baby’s 4 grandmothers.  She told People, “We think it would be super cute to have different names for all the grandmas, like oma, grams or babicka. Grandma said differently or in different languages. Ultimately they get to choose what they are called but my dad will probably be grandpa.”

In one photo her sister Aspyn, Maddie’s biological mom is Jenelle while Aspyn’s is Christine, is seen feeling her bump:

Maddie and Caleb have made it clear that while they honor her parent’s polygamous lifestyle, they have no intention of engaging in a polygamous marriage of their own. They revealed in January that they are expecting a boy.

In Maddie’s most recent pic, the bumping mom-to-be is smiling next to Caleb as she explained that she is 37 weeks along.

Back on April 19 Maddie tweeted, “Every day I look in the mirror and think “No way could I get any bigger!’ Then a week rolls by and I’ve gotten noticeably bigger.”

Maddie’s famous moms and dad have all expressed their support of her marriage to Caleb as well as their excitement over the upcoming newest addition to the family.