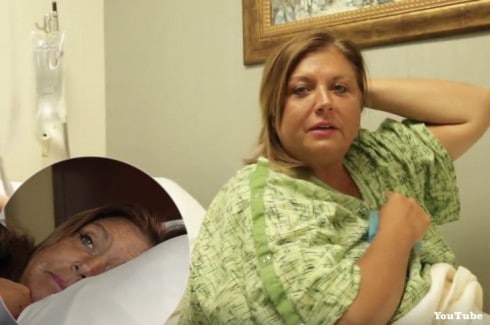 The polarizing Reality TV star shared a graphic video of her recent gastric sleeve surgery to her own channel. She promoted the clip on Instagram with the following tag, “Abby Lee Miller Spills Her Guts! Literally!”

The 50-year-old spoke with Entertainment Tonight about her motivation to go under the knife. “I hate what I look like on TV and I want to look better and nothing makes the mothers more jealous. There’s your motivation. Payback’s a b**ch,”  she said. The drama between Miller and the mothers of the girls she taught dance to were the main drama draw of the show.

Here’s the clip but be warned – it’s graphic, like, “Hey, there’s the removed part of her stomach just laying on a freaking table,” kind of graphic:

Miller made headlines when she announced that she was quitting Dance Moms in a rant via Instagram in which she criticized the producers of the show. She doubled down on this critique of her co-workes when she highlighted how they were partially to blame for her weight gain. “If I was trying to be vegan, [they would] hand me a hoagie sandwich or Italian sub from somewhere,” she said of her former co-workers. “I’m like, ‘What is this, lunch meat? I can’t eat this,” she explained.

Miller, who is scheduled for sentencing on May 8 after entering a guilty plea for bankruptcy fraud in June, was nervous about the procedure and broke down in tears when she added,  “I’m an only child. I’m not married. I don’t have any kids, so there’s nobody freaking out if something happens to me. There’s nobody outside to see if I’m gonna make it or not.”