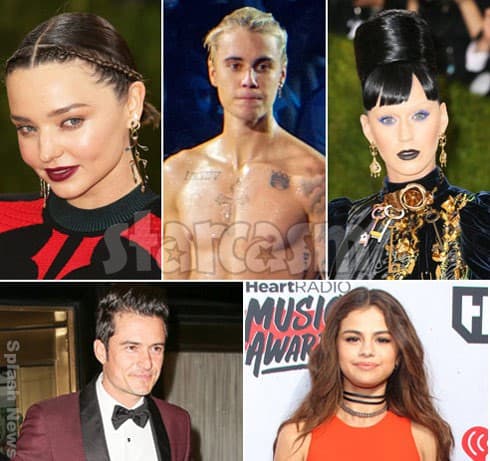 The heat got turned way up for Gomez and Bloom during an after party in Vegas over the weekend. Selena had the soiree as a follow-up to her concert at Mandalay Bay. Sources with TMZ said that Bloom was a surprise late addition to the party, but the actor had no problem making himself known to the hostess shortly after his arrival.

TMZ got pics of the pair getting up close and personal. Their insiders added that Selena, 23, and Orlando, 39, were very hands on before going full-snuggle in a VIP booth:

Orlando Bloom and Selena Gomez — All Over Each Other in Vegas (PHOTOS) https://t.co/y4KiqfmTbY

What makes this all the more interesting is that publicly it appeared as if Bloom and Katy Perry were still an item. They were seen out together at a Met-gala after party last week in New York City.

Perry was attending a Renaissance festival in California on Saturday…

There’s been previous Bloom-Gomez sightings, including one back in 2014 after Bloom had split with his model-wife Miranda Kerr and Gomez had one of her many break ups with Justin Bieber. Further complicating matters was the rumor that Bieber had got back at Bloom by later hooking up with Kerr! Things got so tense between Bieber and Bloom that a punch was thrown during a party in Ibiza.

AND further heightening the intrigue… It turns out that Miranda Kerr was in attendance at Selena’s concert Saturday night.