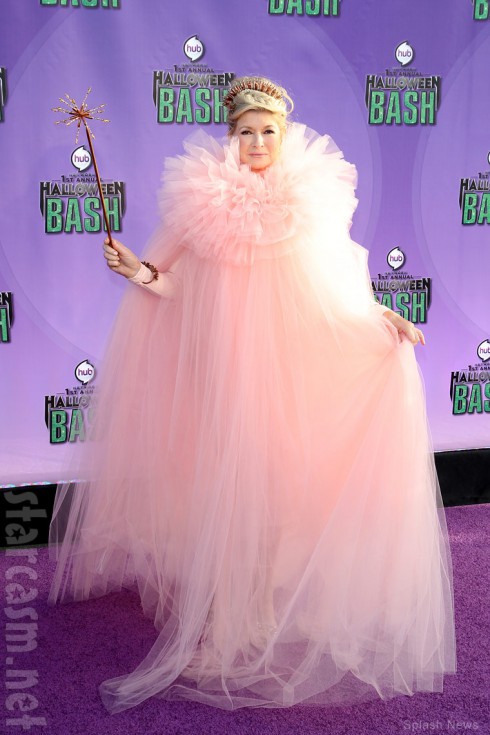 Tonight was the Hub Network’s First Annual Halloween Bash and the children’s television network secured the Queen of craft, Martha Stewart to serve as expert judge for the event, which is scheduled to air October 26. As you would expect, Martha arrived in costume herself, wearing the elaborate pink froo froo “Fairy GrandMartha” costume that she also wears on the cover of Martha Stewart Halloween 2013.

In the annual craft feariodical, which went on sale September 3, Martha describes all the components that went into creating her godmother garb: “A ballerina’s leotard, yards of pink tulle, sparking accessories and excellent makeup and hairstyling all combined to make me look the part.” 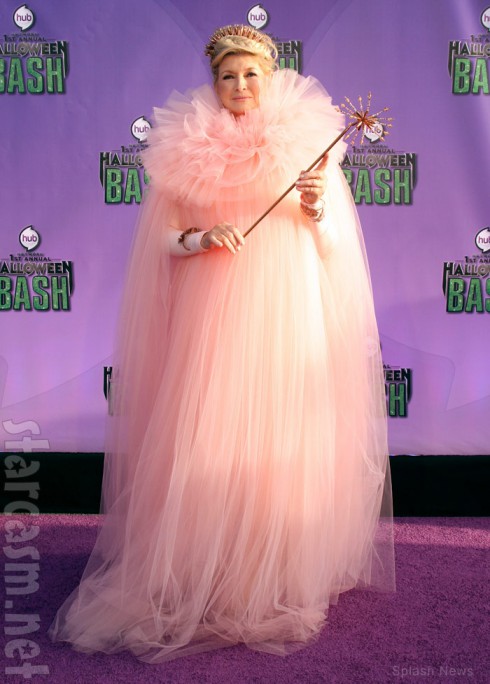 * DID YOU KNOW? Martha Stewart used to be a model! Click here to see the stunning photos!

And speaking of Martha being a model, here she is on the cover of Martha Stewart Living‘s Halloween 2013 issue: 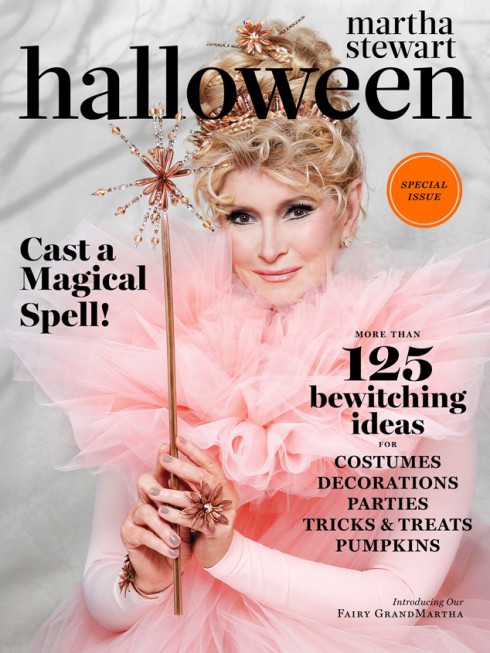 As far as the Hub Network’s Halloween Costume Competition, here are all the details from the official press release about the event and Martha’s judgeship from August 16: 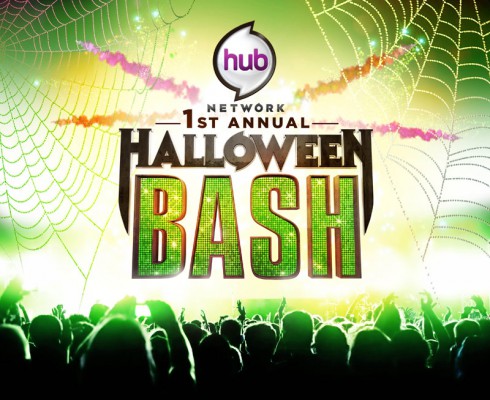 The Grand Prize Winner Will Get $25,000 and A Chance at a Walk-on Role on the Daytime Emmy® Award-Winning Series “R.L. Stine’s The Haunting Hour: The Series”

LOS ANGELES — The Hub Network, a destination for kids and their families, kicks off Halloween early this year by announcing that Martha Stewart will appear as the Halloween expert as part of the panel of celebrity judges scheduled to participate in the network’s nationwide costume competition on the “Hub Network’s First Annual Halloween Bash,” to be broadcast Saturday, October 26. Anyone with a little imagination and creativity can compete for the best costume in America during the nationwide costume competition. Submissions begin Friday, August 16 and 50 semi-finalists representing each state in America will win a trip to Los Angeles to be a part of the two-hour star-studded event. One lucky winner will take home $25,000 and will have a chance at a walk-on role on the Hub Network’s Daytime Emmy® Award-winning series, “R.L. Stine’s The Haunting Hour: The Series.”

“With the nationwide Halloween costume competition, the Hub Network is creating a new cultural event around Halloween, which is one of the fastest growing holidays in the country for kids and their families,” said Margaret Loesch, President & CEO of the Hub Network. “The ‘Hub Network’s First Annual Halloween Bash,’ which was the brainchild of our Chief Marketing Officer Dena Kaplan, will star real people from all over America in a fun celebration that is sure to become a cornerstone event every October.”

Martha Stewart, well known for her expertise in entertaining, food, crafting, and holidays, will be the Halloween expert on the panel of celebrity judges for the costume competition. Stewart’s love of Halloween arts and crafts, including extraordinary costumes – her yearly Halloween issue, which will include a feature of Martha in costume, will be on newsstands September 2nd – makes her the perfect fit for the “Hub Network’s First Annual Halloween Bash.” A celebrity host, additional judges, and musical acts will be announced shortly.

The competition is open to all ages, including individuals or a maximum of five people per group submission. Participants are encouraged to create eye-popping, hair-raising and spooky costumes within one of the following six categories:

· Howl-arious – Shows the lighter side of Halloween with a take on a fun, funny or otherwise hilarious costume.

· Spook-tacular – Get ready to frighten America by showcasing the most spine-chilling costume for all the ghosts and ghouls out there.

· Mad Genius – Unique, original, innovative and never seen before. A knight in armor fashioned from bottle caps, bat wings made from old umbrellas, or a cardboard-box jetpack, the possibilities are endless. Display a costume unlike any other — show your Mad Genius.

· Blast from the Past – Take a stroll down memory lane with a timeless costume. Memories, nostalgia and yesteryear brought to life. Show your take on great figures from before the 20thcentury or a retro 50’s sock hop get up, 60’s flower child or other “period” inspired costumes.

· Animal Kingdom – Transform into a living creature from the past or present. Be a roaring lion, a school of jellyfish, a firefly, or a Tyrannosaurus Rex.

· Everyday Stuff – We’re looking for the coolest refrigerator/freezer, remote control, mailbox, block of Swiss cheese, telephone and more. Be creative and transform the ordinary into the extra-ordinary. 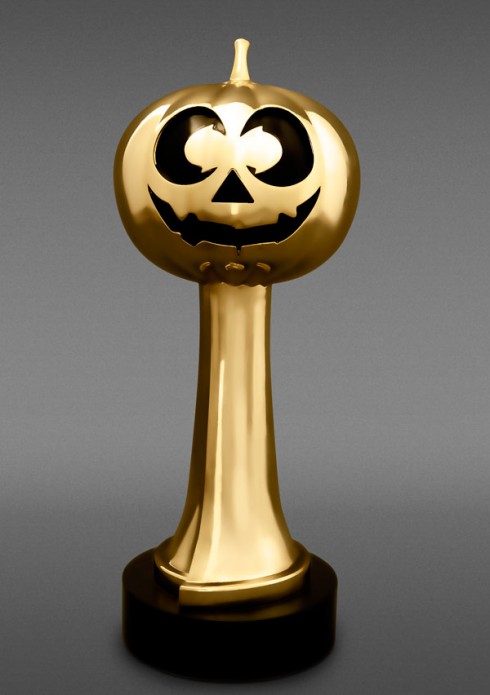 Beginning Friday, August 16, viewers can visit hubworld.com/halloween to view a two-minute tutorial detailing complete details and entry information about the nationwide costume competition. The deadline to enter is Sunday, September 29.

About the Hub Network
The HubNetwork is a multi-platform joint venture between Discovery Communications (NASDAQ: DISCA, DISCB, DISCK) and Hasbro, Inc., (NASDAQ: HAS) with a goal of entertaining, enlightening, empowering and educating children and their families. The cable and satellite television network features original programming as well as content from Discovery’s library of award-winning children’s educational programming; from Hasbro’s rich portfolio of entertainment and educational properties built during the past 90 years; and from leading third-party producers worldwide. The Hub Network’s lineup includes animated and live-action series, as well as specials, game shows, and family-favorite movies. The network extends its content through a robust and engaging online presence at www.hubworld.com. The Hub Network rebranded from Discovery Kids on October 10, 2010, and is available in over 72 million U.S. households. The Hub Network logo and name are trademarks of Hub Television Networks, LLC. All rights reserved.

To find the channel in your area, please visit http://www.hubworld.com and check the channel locator at the top of the page.