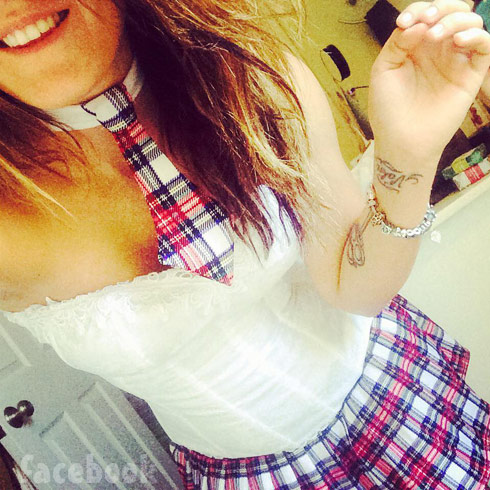 It’s only six days until Old Hallow’s Eve and that means many folks are making their final decisions on what Halloween costume(s) to wear for trick or treating and to all the costume parties this weekend and next. Teen Mom 2 star Jenelle Evans is one of those still struggling with what to wear, and being the social media friendly star that she is, she’s sharing the decision-making process with fans online.

First up, we have Jenelle Evans wearing a sexy schoolgirl costume, complete with plaid mini skirt and matching mini necktie with a lacy white corset top and matching thigh-high stockings. Jenelle shared the photos above and below on Twitter and Facebook, captioning these next two by simply writing, “Feeling sexy,” along with a red lips emoji:

Knowing full well that the photos would probably rile up her sizable Hater Army, Jenelle followed up the photo tweet immediately with:

Lots of folks followed her instructions. Here’s one example that got a response from Jenelle:

@ShitTm2 cuz it's halloween and I posted a pic dressed up like the rest of America?! LMFAO rigggght

And to address those concerned about whether or not the costume was appropriate for trick or treating with children, Jenelle addressed that with a retweet of this response:

UPDATE – Jenelle rocked her sexy schoolgirl costume with hubby Nathan (as Hugh Hefner) while enjoying a fun night out with her Playboy bunny gal pal Rachel and beau Dolph. And of course there are lots of Twitter pics!

Although the “costume” is slightly less sexy, check out Jenelle in her real life schoolgirl outfit (aka scrubs) as she continues working her way towards becoming a clinical medical assistant:

But, let’s get back to Halloween! Jenelle has a couple other costume options in addition to the sexy schoolgirl look, one of which even has a matching costume for Nathan. (A third option has us VERY excited! HINT: We’ve Photoshopped one of Jenelle’s Teen Mom 2 cast mates wearing this costume in the past!)

Want more of Jenelle Evans and Halloween? We’ve got you covered! Check out these links: