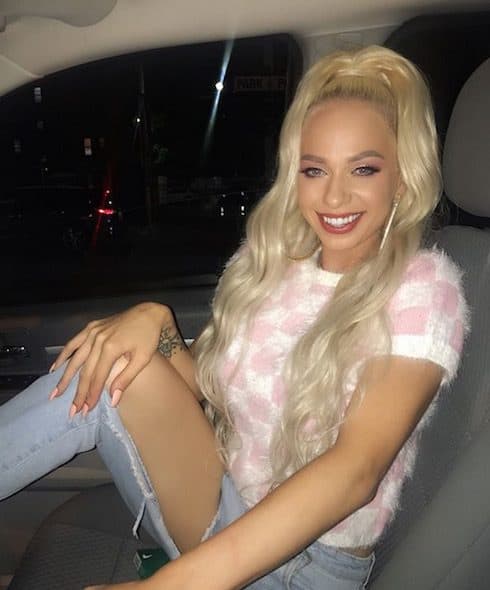 Mariahlynn’s music career is blowing up, and the LHHNY star is reportedly considering getting a body to match her success. In fact, if Mariahlynn takes some advice from a hip hop goddess (and fellow Love & Hip Hop alum), a pair of breast implants–and possibly a whole lot more–may be on the way.

Fresh off her unexpected drama with new cast member James R, Mariahlynn is elated to land a collaboration with Remy Ma. The music isn’t what gives Remy pause, though–it’s Mariahlynn’s look, which Remy thinks isn’t working for her protégé at all.

“I’ve always told you,” Remy tells Mariahlynn, “I think there’s a lane that’s open for you…[but] I’ve told you my biggest distraction: I think the way you do your hair, the way you dress–it doesn’t fit with your look.

“I think you should go super sleek,” Remy goes on, “actress, glam, Hollywood white girl, and stay in that lane.”

And Remy gets even more pointed in a side cut: “I don’t know who’s getting in her head, telling her to look this way,” she says. “If they don’t accept you for who you are, f*ck them.”

(On a related note: For those of you wondering whether Mariahlynn is white, black, or mixed, we’ve covered that topic in an article here.)

Things get more specific, though, when Mariahlynn talks about the “Utopian ideal” of a rapper that some social media haters seem to have in mind:

“I know people who, like, have disorders,” Remy responds, “trying to look how you look.” Which prompts Mariahlynn to start talking about the work she could have done on her chest, getting quite handsy in the process, and granting Remy a long look at one of her nipples in the process.

This, of course, leads Remy to give the most sage advice of all: “Anything that you’re unhappy with, if you want to change it because of you, I’ll co-sign it all day. I will never, ever, ever, ever co-sign something because everyone else says they don’t like X, Y, and Z about my body.”

But did Mariahlynn have plastic surgery done? And what did she do? Eagle-eyed fans noted that Mariahlynn and Dr. Miami did a live breast augmentation consult this past February (though the video has since been deleted). And Hollywood Life reported on Mariahlynn topless during a performance at a California club this past autumn–during which her breast implants were said to be quite noticeable.

So, while we can’t confirm with 100% accuracy any plastic surgery that Mariahlynn might have had, we can also point out that her social media feeds are quite a bit bustier than they used to be:

Sometimes doors close because it’s time to move forward. God knows you wont move unless your circumstances force you. Trust the transition, God got you! ?

Welcome to the evolution of Mariahlynn ?

(Photo credits: Did Mariahlynn have plastic surgery via Instagram)

Simona Halep before and after breast reduction surgery photos