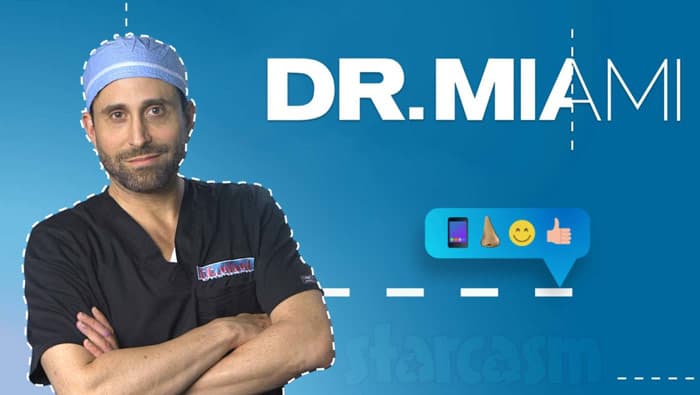 As we reported waaaaay back in July, celebrity Snapchat plastic surgeon Dr. Miami is getting his own reality series on WE tv — and now we have the first promos for the show, as well as a premiere month!

Part of the reason that Dr. Miami has millions of social media followers is because of his rather boisterous irreverence and humor in and out of the operating room — and WE tv is apparently embracing his successful brand as they promote the show with a series of butt ‘n’ boob jokes.

In this first promo, Dr. Miami hides the posterior of a woman with a beach ball along with the words “A$$ for him by name:”

BUTT, that’s not all! Here’s a titillating teaser in which Dr. Miami covers a woman’s coconuts with a couple of colorful palm trees with the slogan “The breast in the business:” 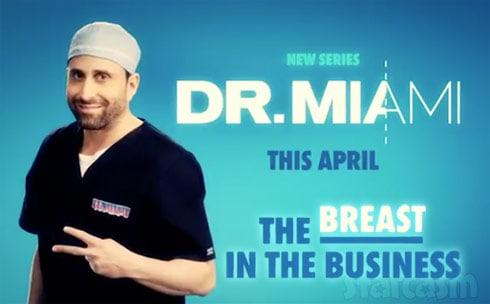 As you can tell from the tweets, Dr. Miami will premiere some time in April. As far as what viewers can expect to see, here’s how the network describes the series:

In each of the six one-hour episodes, Dr. Miami includes two surgeries with unprecedented access — taking the patient from consultation, to the operating room, through the challenges of recovery and to the exciting final reveal. That journey is peppered with plenty of emotion and behind-the-scenes drama between Dr. Miami’s office staff of divas.

Dr. Miami land is a never-ending soap opera of over-the-top patients, wild antics, and salacious moments with his staff. Dr. Miami believes the transformative power of plastic surgery changes people’s bodies and their lives by giving them the confidence they never had before – once complete, his patients are “Beauty Warriors.”

It’s still unknown just how far WE tv will be willing to go as far as showing the rather graphic surgical procedures. If they go as far as Dr. Miami does on his Snapchat and Instagram accounts, I have a feeling this show is going to dominate water cooler (and social media) conversations come April!