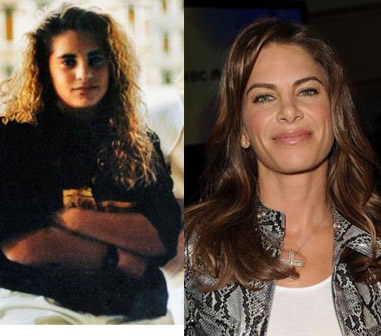 The now thin fitness brand known as Jillian Michaels was once an overweight teenager who suffered from depression. She’s shared her story about how she overcame depression and got motivated to lose weight, and now she’s opening up about her nose job!

Who knew she even had a nose job! Apparently being overweight wasn’t the only thing getting young Jillian down, she was also harrassed by the other kids about her “football sized nose,” and “unibrow.”

The unibrow can be easily fixed with some tweezers and/or wax, and the weight can be handled simply enough with a little effort, but an unloved nosed requires a more drastic kind of transformation.

In eighth grade, I weighed 175 pounds and my nose was the size of a softball. Once, I was sitting at lunch and got surrounded by a bunch of kids who let me have it about how ugly I was — my unibrow, the size of my nose, the fat rolling over my jeans. It was pure hell. My mom had to pull me out and put me in another school. “I had my nose done,” she admits. “I felt much better about myself. Plastic surgery is a very personal decision.

It looks like she didn’t get to drastic with it, so that’s good. It’s always really strange when someone suddenly has a pencil-thin nose.

Who is Jillian Michaels’ girlfriend Heidi Rhoades? They welcomed two babies this month!

PHOTO Guess which supermodel wore a burqa as a disguise when heading into the plastic surgeon’s office?