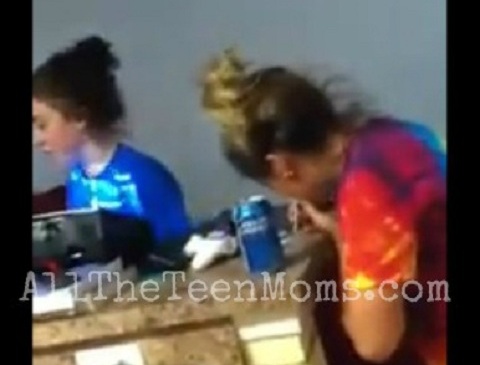 Jenelle Evans is appearing in court today to face charges of drug possession and assault stemming from an incident with her ex Gary Head last month. As if that didn’t make her day bad enough, someone posted a video of her snorting a foreign substance on her own YouTube channel. Although the video was only live for a short time, a savy blogger managed to capture screen shots of Jenelle and other info before it was removed.

The video, which was only a few seconds long, showed Jenelle bending down and snorting some sort of white substance off her counter through a straw. According to All The Teen Moms, the caption to the video post read, “I love to party and do drugs. I constantly lie and tell everyone that I am clean and I don’t do drugs. I’ll never get my son back because I would rather do this than spend time with him.” 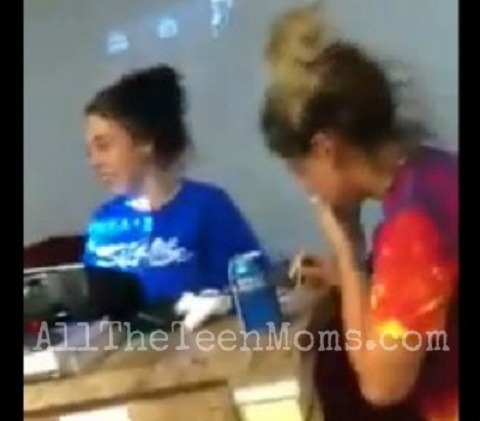 This isn’t a brand new video, which fans will notice from the color of Jenelle’s hair. Way back in April of last year, she had traded in her brown strands for blonde and remained that way until early last month when she went back to her roots. However, there’s more to the pic than just the hair. You can also notice that she’s in her current apartment, which she began living in this past March. So technically, this video could have been shot anywhere from mid March until early June.

Jenelle’s current boyfriend Kieffer is the only one to address the video. Well, we think he was addressing the video when he tweeted, “What a f***ing p***y… uu no who yu are….” It sounds like her ex Gary Head could have had something to do with it. Could he have still had access to her Youtube account? The video was shot when they were together, but you’d think she would have changed her log in info after that mess of a relationship.

News of this video comes just two weeks after Jenelle’s friend, Allison Lester, exposed Gary’s alleged drug use. He was photographed in nearly the same exact position as Jenelle — in her house, snorting something off of her counter-top.

UPDATE: Jenelle has released a statement regarding the video. She tweeted, “Lmao I didn’t snort shit that was a pixie stick I was dared to do it. If it was Xanax I would admit it.” Jenelle clarified that it was James Duffy who hacked her YouTube and posted the video.

Jenelle later tweeted, “I get prescribed Benzodiazepines for my anxiety and bi polar.”