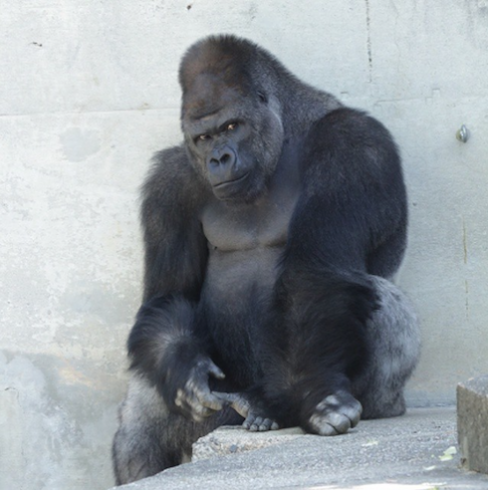 Shabani is an 18-year-old gorilla at the Higashiyama Zoo and Botanical Gardens in Nagoya. He is also, according to many thousands of women, an unusually handsome gorilla. In fact, his nickname is “ikemen,” which is Japanese for “unusually handsome man.” And zoo officials are shocked at Shabani’s popularity.

“We were very surprised by the phenomenon,” said Takayushi Ishikawa, the zoo’s spokesman. “It’s a perfect example of the internet society.”

Check him out. Japanese women go bananas over handsome gorilla at zoo http://t.co/KgKN0yljCfpic.twitter.com/v9sXxFtMVe

“He’s more buff than most gorillas and he’s at his peak physically,” the spokesman added. “We’ve seen a rise in the number of female visitors. Women say he’s very good-looking. He seems to have noticed his new popularity, but he’s kept it very cool.”

Takayushi added that the handsome gorilla regularly has a crowd of around 100 admirers around his pen, waiting for him to come out.

This handsome gorilla has found fame in Japan, and girls are lining up to see him http://t.co/nM9Gsl4eAbpic.twitter.com/9dp0BtRLYL

Unfortunately for any women trying to catch his eye, Shabani already has two wives at the zoo. Ai and Nene are the mothers of Shabani’s two offspring, Annie and Kiyomasi. And, by all reports, Shabani is an excellent and protective father.

Japan is going crazy over this handsome gorilla. http://t.co/5uNdkyPCSlpic.twitter.com/UrllqVTVeh

“I have seen quite an early photo of him,” Smitham said, “and he’s not the handsome man that he is today.”

So: Is all the furor justified? Is this, in fact, a handsome gorilla?