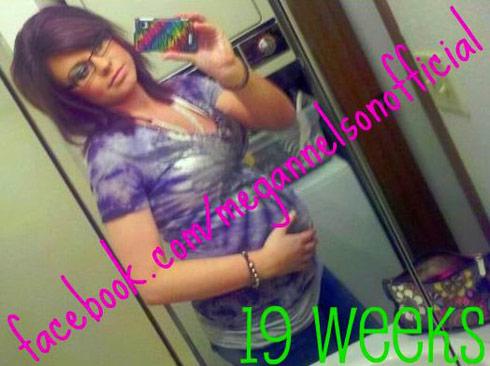 In Season One of Teen Mom 2 Megan Nelson won over the hearts of television viewers as the level-headed (and white-teethed!) roommate of Chelsea Houska. The duo had a falling out over Chelsea’s decision to get back with troublesome ex and baby daddy Adam Lind, but would eventually make up once Adam was gone again.

Since her departure from the show Megan has found herself a man in the form of military hunk Cody Ovre, and back in early February the young couple announced they were pregnant and that the baby was due July 7! 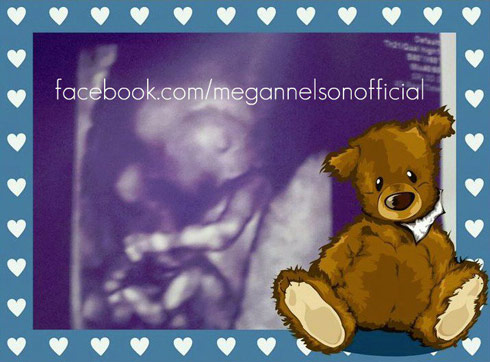 ^ Sonogram from before they knew Hunter was a he

But little Huckleberry (Megan’s nickname for her unborn son) was a little impatient and wound up beating his due date by three days. That’s right, little Hunter John Ovre shares a birthday with the good ol’ US of A – born July 4, 2011 weighing a whopping 9 lbs 8 oz and measuring 21 inches long! (And did I mention she had him naturally?)

Megan was kind enough to take time out from being a teen mom herself and answer a few questions for us! 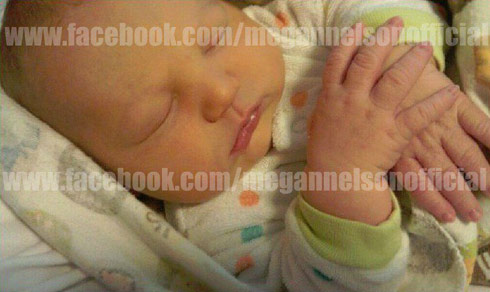 Hunter was a pretty big bundle of joy and you delivered him naturally – how did the birthing go? Was it similar to what you expected?

The delivery for Hunter wasn’t what I thought it would be like. I wasn’t on any pain medication so that I could feel when to push. However, it took a long time for my doctor to get into the room and the nurses had told me to STOP pushing until she got there. That would have to have been the worst part of the whole thing! Other than that it was absolutely beautiful watching him 🙂 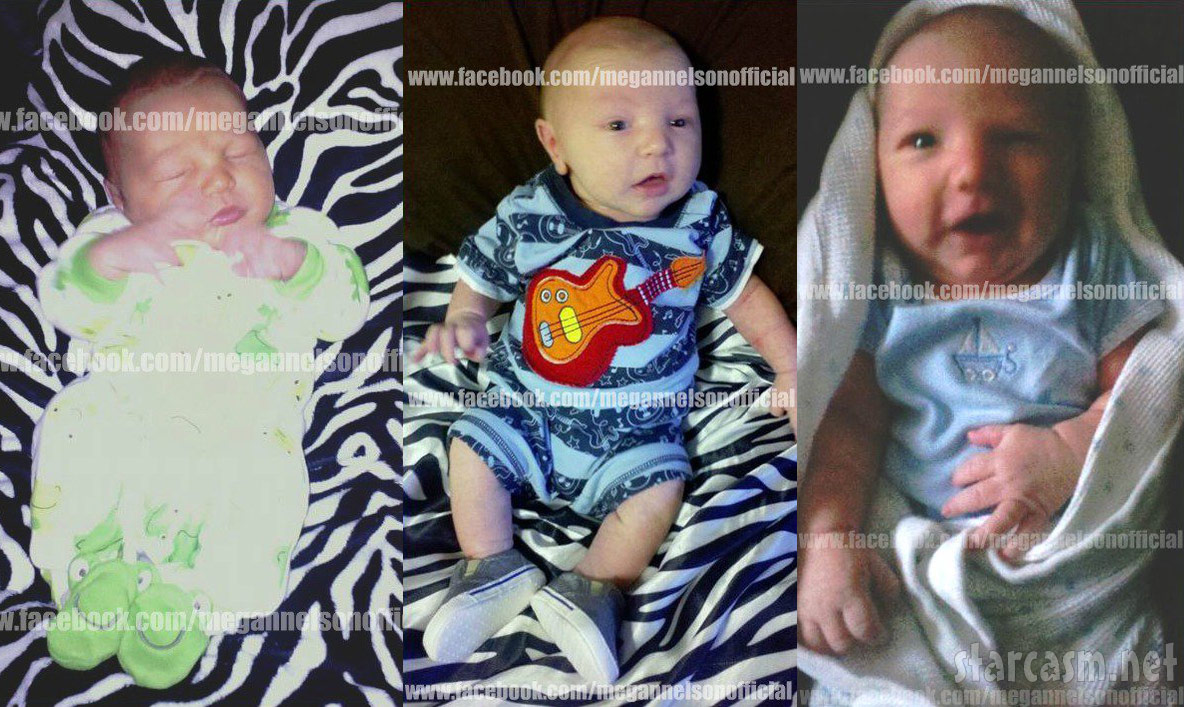 You had some medical issues afterword – do you feel comfortable sharing any of the details? And how are you now?

After delivery I had a few complications. For having a 9lb and 8oz baby, 21inches long they were surprised I hadn’t torn delivering him! (haha – and so was I.) They couldn’t get me to stop bleeding internally though. While they were pushing down on my uterus to shrink it, i had blood clots the size of grapefruits one after another. I was down to only 23% of the blood that SHOULD be in my body. THAT was more painful than giving birth!

Finally at 3am, 6 hours after i had delivered him, the bleeding had calmed down enough for my new family to move upstairs to our new room. Things didn’t end there, though.

I had several vaginal ultrasounds, blood tests and a catheter put in. It was 5 1/2 hours later that they found out that I had gotten a stitch put in next to my urethra which was making it burn when i had to urinate. The doctor that I was seeing had no idea as to why they would have put a stitch there in the first place, so it was taken out in hopes that that was the problem.

Four days later i was headed for the ER. Urinating had only gotten worse. It only took the on call doctor maybe 5 seconds to take a peek and tell me that where they had put the suture was infected pretty bad. So, i got sent home with an antibiotic to take for seven days. The first 24 hours of taking the antibiotic would be the most painful.. Like they say “it gets worse before it can get better”. And sure enough, it got worse, but seven days later I was feeling absolutely amazing! Finally back to my old self. And honestly I would go through it all again if I had to just so that I could have my little angel 🙂 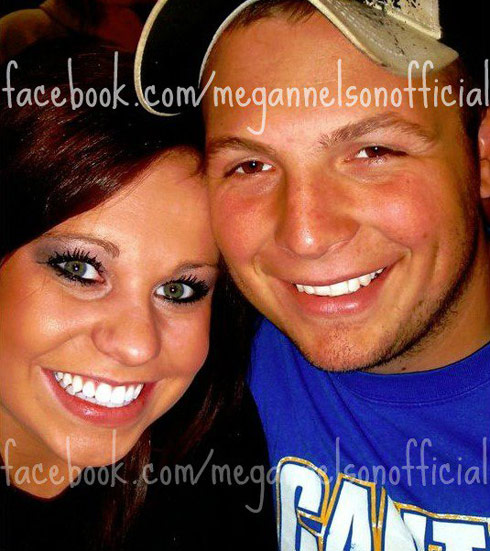 So what are the plans for you, Hunter and Cody in the near and distant future?

So far things with my new family have been better than what I had ever dreamed of! And I don’t see it going anywhere but up from here. Cody and I have talked several times about marriage and how it IS in our future, but no rush. I have everything I have ever wanted right now with or without a ring 🙂

Thanks so much to Megan for taking the time to speak with us – not only is she a new mother but also just out of the hospital! We’ve always been a big fan of hers and wish her and her new family all the best! 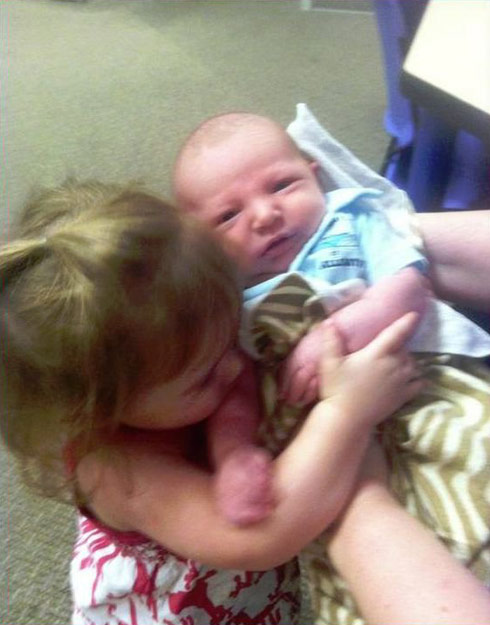 *** I would be remiss to write this article without at least some mention of the online drama surrounding the birth announcement. As you may know, Megan Nelson has a Facebook fan page on which she and her dad, Lance, are two of the admins for. A few days after Hunter was born news began to leak before Megan had made the official announcement on her page, which was delayed in part by her hospital visit.

There was a bit of arguing between fans of the page and its admins (Megan not included), especially Lance, who as you might expect wanted to honor the wishes of his daughter and wait to make the announcement until she was able to do it herself. There was lots of arguing, page unlikes, and even numerous uses of something called the “ban hammer.”

It was a difficult situation for everyone and I feel like offering any sort of opinion on the matter would only be divisive and unproductive at this point, so I say let bygones be bygones. Megan is the proud mother of a beautiful baby boy and Lance can put away the ban hammer and allow himself to be a doting grandfather! Everything is good! 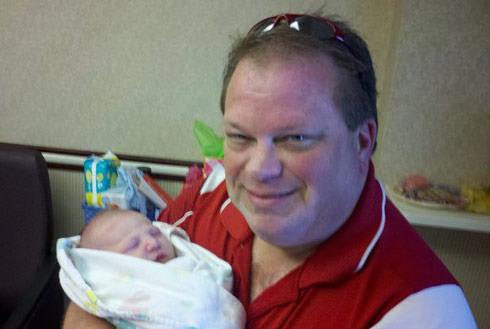 On a completely random sidenote of sorts, I thought I would share my new favorite Megan Nelson photo… 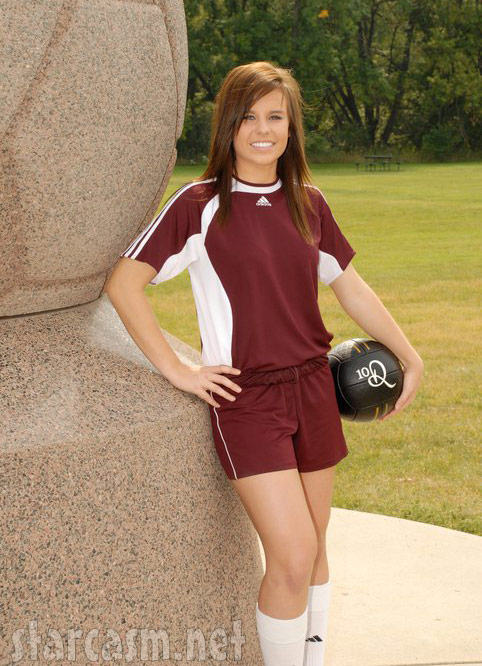 Her dad posted it on her Facebook page and captioned it with a bit of Megan’s soccer history:

Megan played soccer since she was 5 yrs old and was on a traveling club soccer team that played in Colorado, Las Vegas, Kansas City, Omaha, Minneapolis and a few other places. She was on the Varsity soccer team at her highschool starting her sophomore year.

Jenelle and David Eason dog shooting update: ‘David and I are not on talking terms…he’s very cruel’