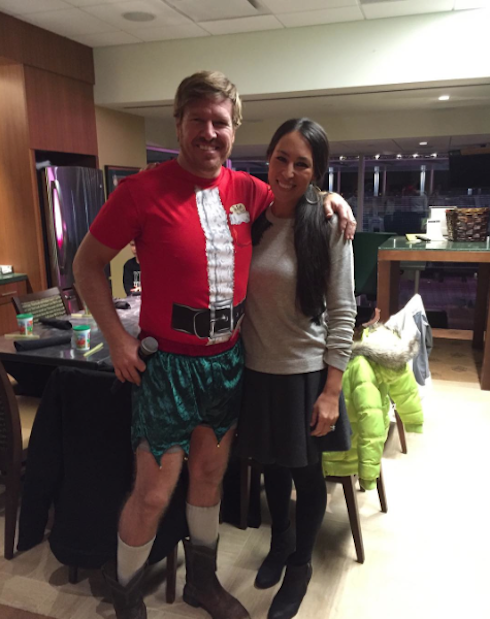 Ever since Joanna Gaines dropped a hint about a Fixer Upper B&B a couple months ago, fans of the HGTV hit have been salivating at the prospect of staying at a Magnolia Homes-themed hotel. Now that the new season of Fixer Upper has premiered, more details about the Fixer Upper B&B have leaked out–including a contest involving a decadent getaway at the venue itself!

To be perfectly honest, though, the very first hint was not especially subtle. Joanna gave all her Instagram followers a huge wink with this September post, and got buzz about the project going:

That was all the way back in September. Then, as the premiere of Fixer Upper‘s third season drew near and the publicity machine really cranked up (rest in peace, #seasonthreeiscoming hashtag), Joanna confirmed the existence of a Fixer Upper B&B…but still didn’t tell fans of the show what to expect beyond that:

Just revealed our second to last house for season three! This is probably my favorite house of the season because A) It’s our bed and breakfast project and YOU can stay here and B) It’s decked out in Christmas! I can’t wait for you to see the huge reveal in December! One more to go this week and season three is a wrap. #fixerupper #seasonthreeiscoming @hgtv A photo posted by Joanna Stevens Gaines (@joannagaines) on Nov 15, 2015 at 7:25pm PST

That Instagram update came a mere two weeks ago–but, thanks to the intrepid detective work of fervent Fixer Upper fans, we know that the houses that make up season three won’t be shown in order of completion. How? Because, thanks to the Fixer Upper B&B contest, we know exactly when to expect the project’s glamorous reveal: it’ll come on Wednesday, December 23rd, during the brand-new Christmas episode of Fixer Upper.

That’s right–the Fixer Upper B&B will be decked out in its Christmas finest for the big unveiling (something that’s sure to inspire months’ worth of giddy reservations ). And, according to a brand-new press release from HGTV itself, you, the viewer at home, can get in on the fun by entering the Fixer Upper B&B contest. Here’s the most relevant portion, for your contest-entering pleasure:

Fixer Upper’s Ultimate Escape Sweepstakes,which kicks off on Tuesday, December 1 during the Fixer Upper season premiere at 9 p.m. ET/PT, will offer one lucky viewer the chance to win a grand prize trip for two to Chip and Joanna Gaines’ Magnolia House bed-and-breakfast in Waco, Texas. The grand prize package includes round-trip airfare, a two-night stay at the bed-and-breakfast, and $500 cash. Four other lucky viewers will win a $500 gift card to Wayfair.

To enter Fixer Upper’s Ultimate Escape Sweepstakes, viewers should watch new episodes of Fixer Upper for the special code word that will appear several times onscreen and then visit hgtv.com/fixeruppersweeps to complete their entry. The Sweepstakes will run through Wednesday, December 23, and coincides with the Fixer Upper holiday episode about the bed-and-breakfast.

That sounds like a pretty sweet deal! And the $500 cash will go a long way in the Magnolia Market warehouse.

It’s also worth pointing out that there’s been a bit of confusion about the date above. Some sites list Tuesday, December 22nd as the date the Fixer Upper B&B contest closes, instead of the 23rd. The confusion seems to spring from the fact that new Fixer Upper episodes air on Tuesdays–and the 22nd of December is a Tuesday–but the contest itself closes on each Wednesday.

So, to clear things up: “A Home Away From Home For The Holidays,” the Fixer Upper B&B episode, will air on Tuesday, December 22nd, at the usual time–9 PM EST. Then, the following evening, the B&B contest will close at 8:59:59 on the dot, according to the official site.

Everybody got that? Good–now, go and scour the internet to find the entry word from last night’s episode, in case you missed it 😉

Unfortunately, one thing we don’t have yet is any photos of the actual Fixer Upper B&B itself. We know from the description of the episode that it’s an old Victorian home Joanna fell in love with while showing it to a couple for the show. The couple chose another house, so she brought Chip back and “shar[ed] with him her vision of turning the old Victorian beauty into a bed and breakfast.” There might be a sneak peak or two between now and the 22nd; for the time being, here’s a handful of Fixer Upper Christmas photos from Joanna to keep you sated:

I've got my lucky Baylor socks on, Christmas music playing, and my two favorite girls with me. It's a good day. #sicem

I love that you love your room, little one. ?

I love how Christmas decor make a home feel so warm and cozy. I also love a Christmas tree that displays years of memories and sweet moments as a family. Here's to happy holiday decorating!! #mostwonderfultimeoftheyear

Finishing up Christmas details at the shop today- up next is the farmhouse! #dontjudge #bestimeoftheyear @magnoliamarket

RELATED: Everything you ever wanted to know about the Fixer Upper silos
Is there a Fixer Upper hotel? Joanna Gaines drops major hint on social media
How much would it cost to decorate your house like a Fixer Upper reveal?
Do the people on HGTV’s Fixer Upper get to keep the furnishings?