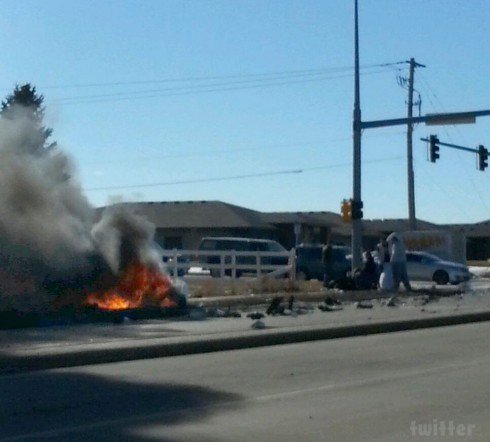 Teen Mom 2 star Chelsea Houska’s ex Adam Lind faces pending charges after being involved in a fiery car crash Friday afternoon. According to a Sioux Falls Police Department press release, Adam was driving his 2001 Chevrolet Corvette Z06 at “a high rate of speed” when he collided with a 2003 Lincoln Town Car driven by 87-year-old Donna L. Fodness. After hitting the Lincoln, Adam’s Corvette ran into a traffic signal pole and then a fence before bursting into flames.

The photo above is from the crash scene and was tweeted by @Flandeez as was this next one:

Police officers were summoned to the accident scene at the corner of intersection of 57th St. and Southeastern Avenue at 2:33PM and found Adam’s car fully engulfed in flames. Adam (who appears to have been alone) was removed from the vehicle by witnesses and was later transported by ambulance to Avera-McKennan Hospital for treatment of non-life-threatening injuries.

The driver of the Lincoln Town car and her passenger, 94-year-old Orval E. Fodness, were also transported by ambulance to Avera-McKennan Hospital for non-life-threatening injuries.

According to the press release, “Criminal charges against Adam Lind are pending as the investigation continues.”

In case you missed it, Adam Lind has a terrible driving record that includes being convicted of three DUIs, pleading guilty to separate charges of exhibition driving and careless driving, numerous speeding tickets (including one for going 105mph), seatbelt violations, driving without a license, driving without insurance, and other traffic citations. Click here for a complete timeline of his arrests and charges over the last few years.

Here is before photo of (one of) Adam’s Corvette’s with his daughter Aubree in the foreground:

And here is a photo of the charred remains of his Corvette involved in the accident on Friday.

This is all that's left of a vehicle involved in a crash in Sioux Falls this afternoon. http://t.co/1ZPeunGHkP pic.twitter.com/BlEBjzbisU

UPDATE – Here’s another photo from the scene from @BeccaKC, who initially tipped us off about Adam being involved in the accident:

@starcasm this was 2 blocks from elementary school, I drove up on the accident on the way to get my children. Very scary!

UPDATE – Someone took a cell phone video of Adam’s burning car after the wreck and shared it on Youtube: