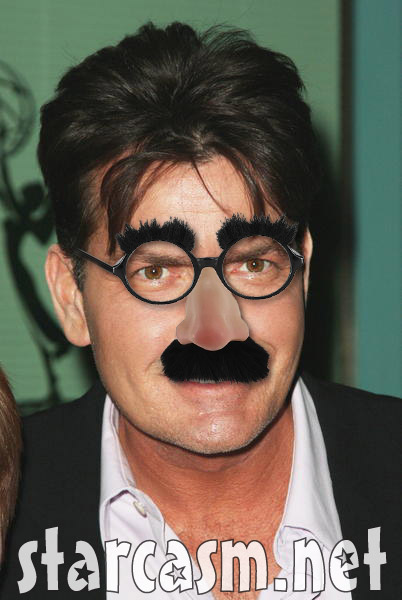 Charlie Sheen is the tabloid gift that just keeps on giving! Not only was he sneaking around on his wife Brooke Mueller with lingerie model/escort Angelina Tracy while in rehab, but he was doing it wearing a ridiculous dollar store disguise! In Touch Weekly has the exclusive scoop in this week’s issue including pictures of Sheen wearing “a hooded sweatshirt, dark sunglasses and a fake Magnum P.I.-style mustache , while sneaking into and out of his mistress Angelina Tracy’s Studio City home.” 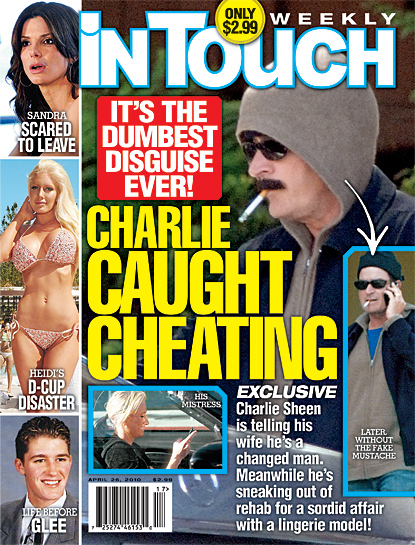 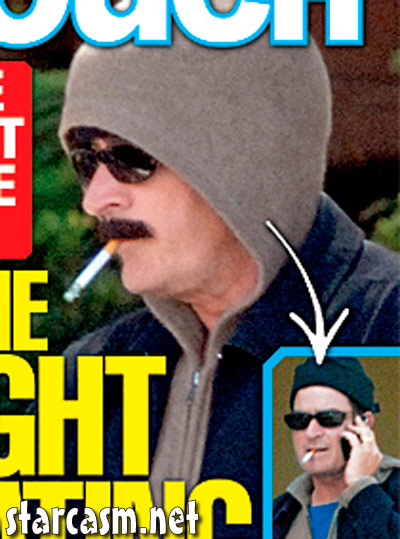 Here are some of the deets:

In Touch has learned that Charlie has been regularly slipping out of rehab and cheating on his wife with lingerie model Angelina Tracy — also a paid escort who charges $3,000 an hour under the professional name of Nina. Though there’s no indication that Charlie is paying to spend time with Angelina, she was brought back to his mansion while Brooke was out of town, a source reveals.

For a “lingerie model” there sure aren’t many pictures of Angelina Tracy floating around the web, and Lord help you if you’re trying to find a particular blond escort named “Nina” in the Los Angeles area! That being said, here is a photo from a Los Angeles Angelina Tracy Facebook profile that looks quite a bit like the woman in the inset photo on the In Touch cover: 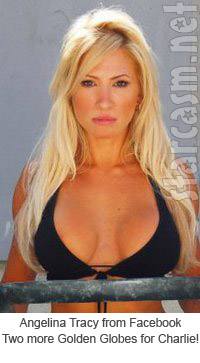 And here are some matching thumbnails from a Friendster account. (If this is the wrong Angelina Tracy and not someone Charlie Sheen has slept with, just give it time and eventually Charlie will make it so!)

Bring back memories of Heidi Fleiss anyone? Wait, if these two get married, Angelina’s stage name could become Nina Sheen! You can’t beat that!

Forget Two and a Half Men, Charlie needs to star in his own unstaged sitcom reality show! Maybe they could play off the famous Farrah Fawcett TV series from the ’70s and call it Charlie’s Devils?

See more photos and read all about Charlie’s cloak and dagger antics in this week’s issue of In Touch which hits stands Friday!

Did Charlie Sheen pull a knife on his dentist while high on crack?