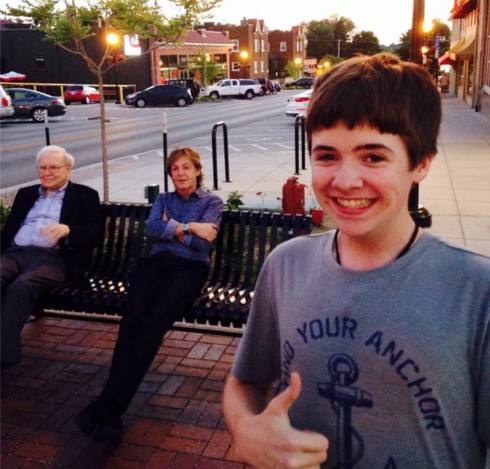 In a state with three times as many cows as people, it’s a rare day in Nebraska that you run into one celebrity — let alone two of the best-known people in the country.

Remarkably, that’s what happened to teen Tom White on a Sunday stroll through Omaha when he stumbled upon Berkshire Hathaway’s Warren Buffett and The Beatles’ Paul McCartney. Tom then did what any good modern teen would do by taking an epic selfie with the two unengaged celebs. (Update: According to Mashable, Tom got the picture with a little help from a friend, so it isn’t a genuine “selfie.”)

“Chillin with my homies,” he captioned the Instagram picture.

Considering Warren Buffett is a Nebraska native who still lives in the area, the sighting of a billionaire in the wild isn’t too uncommon. Paul McCartney’s presence can also be explained by his concert tonight in nearby Lincoln. But, managing to stealthily photograph the two celebrities together? That’s like catching lightning in a bottle.