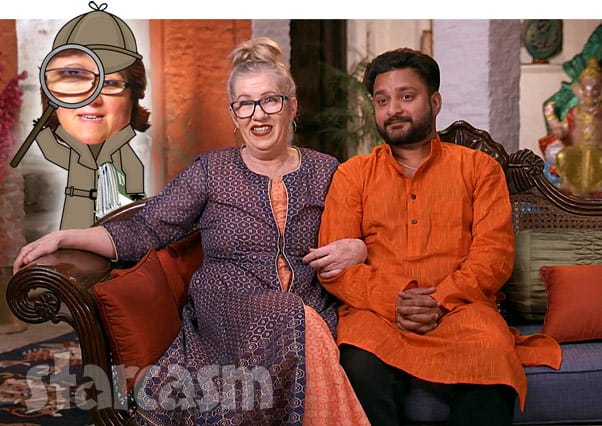 90 Day Fiance: The Other Way previews are teasing a big secret that Sumit has been keeping from Jenny, and thanks to multiple behind-the-scenes reports that have recently surfaced about the Couples Tell All taping, we may know what his secret is. And it is a WHOPPER!

According to multiple sources, Sumit was already married to someone else when Jenny arrived in India! The alleged marriage was prearranged, and Sumit’s relationship with Jenny was in defiance of the arrangement and to help him get out of it.

The scoop has played out across multiple Instagram accounts over the past few days. The initial spark was a post by 90 Day Fiance YouTuber Keith Brooks, who famously broke the “Azan’s Spanish girlfriend” story last year. “Sumit married (told by a verified source),” Keith wrote in the caption to an unrelated photo on Tuesday. (Keith is currently occupied with his work and not uploading videos.)

The following day, @fraudedbytlc added some details to Keith’s report:

Sumit is already married. He was arranged married while he and Jenny were on a break. Jenny knows and has known since before filming began. He did the show to stand up to his parents. He cannot come to the US on a fiancé or spousal visa because he is legally married to this other woman and needs a divorce.

Unconfirmed leaked information from The Other Way Tell All.

The account would later clarify that Jenny may not have been aware of Sumit’s marriage when she initially made the trip to India. “Other sources are reporting that Jenny did NOT know about Sumit’s secret marriage until maybe around the Tell All. My source information believed that Jenny knew earlier but could be mistaken about WHEN Jenny knew.”

@90DayFianceCrayCray then picked up the ball and stated that two sources confirmed that Jenny did not know about the marriage initially, but she found out before the Tell All while recording during the season. So, that would certainly seem to open the door for Sumit’s secret to be the marriage!

There have also been multiple reports that Jenny has since returned to the United States, which would seem to confirm that she and Sumit did not get married.

If you’re curious about other potential 90 Day Fiance: The Other Way spoilers from the Couples Tell All special, Keith Brooks (with a little help from a few others) shared the following claims:

• Unaired footage showed Evelin talking with her ex again. Also, she was “stopped at the border” after being denied a visa to the United States to attend the funeral of Corey’s dad.

• Tiffany and Ronald are working on getting him a spousal visa so that he can come to the US.

• Leida was in New York City during the Tell All taping and babysat Deavan’s daughter Drascilla.

• There was a PhD therapist on hand to talk with cast members.

• Deavan and Jihoon are currently filming for The Other Way Season 2, including their wedding.

To see if all of these spoilers play out — especially Sumit’s big secret — be sure to keep tuning in for new episodes of 90 Day Fiance: The Other Way airing Monday nights at 9/8c on TLC!