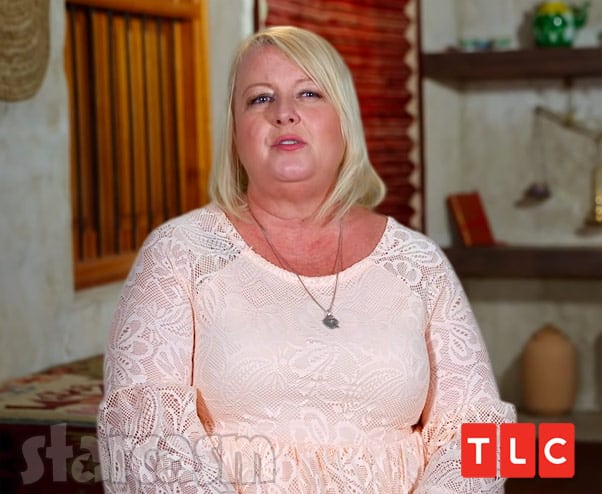 90 Day Fiance: The Other Way star Laura Jallali shocked fans (and her husband Aladin) last week when she announced on Instagram that she was pregnant. After Aladin responded by joking about the father being Laura’s infamous purple sex toy, fans began to dismiss her announcement as just a joke to troll viewers. However, Laura later doubled down on her pregnancy claim, before then changing her story and saying that she suffered an ectopic pregnancy.

“We just found out I am with child, so lots has changed,” Laura revealed to Instagrammer @talker_of_?s_ in a text message conversation just after her initial announcement. “I was totally surprised!” she added — in addition to giving @Talker permission to post the conversation.

Today Laura and I had a conversation where she came clean about her pregnancy and the status of her relationship with Aladin. This has really taken a turn on the dark side and I’m not sure how much more I’m going to touch on the topic. If these issues are something that you’re sensitive about, just go ahead and skip reading this one. As of right now, she is NOT pregnant and they are NOT together. *posted with her permission

Laura also spoke with Afterbuzz, who shared a video update on Thursday. “Truth is, I had an ectopic pregnancy and I was over the moon because I felt God was giving [me] a gift with all I have lost in the last couple of months,” Laura said. She admitted that her decision to talk about the pregnancy on social media was “stupid,” but added that it was the only way that she could get to Aladin because he has her blocked.

In summary, Laura announced that she and Aladin are still together and she has a “muffin in the oven” on September 14 in hopes that it would get Aladin’s attention and he would unblock her. Laura then confirmed that she was currently pregnant, but she later admitted she was not pregnant and had suffered an ectopic pregnancy. She hasn’t provided any sort of a timeline, but she did reveal later that she was in Canada with a friend at the time. Either way, it was clearly some time ago. OK, that’s the CliffsNotes version of this entire post.

As mentioned briefly in the DMs with @Talker, Laura and her dog are currently visiting her co-star Evelin in Ecuador. (There are unconfirmed reports that Evelin and Corey have split up, and despite Laura mentioning Corey numerous times, he has not been seen yet in any of her videos posted from Ecuador.) While Evelin is clearly #TeamLaura, another of her co-stars is definitely not.

Deavan Clegg shared the following message on her Instagram story, and even though she doesn’t mention Laura specifically, it is clear who she is referencing:

I wasn’t going to speak out on this. But knowing what I do I need to speak up. It is never okay to lie about being pregnant and use it as a way to get an abusive person’s attention. I’ve experienced abuse and the best way to escape is to leave it and not bother with it. At that point you are enabling the abuse. I know the truth and I will leave it at that. I’m very saddened and disappointed to see all this.

UPDATE – We may know part of the reason Deavan was motivated to speak out because she is apparently pregnant herself! Click the link for all the details!

The Other Way Couples Tell All special was filmed recently in New York City, and there are multiple reports that indicate Laura and Aladin’s issues were front and center during the taping. Instagrammer @FraudedByTLC has been spot on with her behind-the-scenes reporting on the franchise, and she shared the following update late last week:

I have independent verification (i.e. not from Laura) that Aladin had been emotionally and possibly physically abusive towards her, some of which we will see at the Tell All. Because of this, Laura reacted poorly, to say the least. She will allegedly be posting an apology and retraction and taking a social media break. I hope this happens and it allows her to begin healing. Clearly something needs healing to create a lie that big.

As you are probably aware, Laura didn’t go the “apology and social media break” route, and instead made the ectopic pregnancy announcement and continued to share updates on Instagram.

One of Laura’s Instagram updates was a live session in which she called out @Talker and @Frauded by name. “They should be disgusted with themselves because they took advantage of me at a very vulnerable time in my life,” Laura stated. “They have gone on to spread incredible lies, OK?”

Here is a portion of Laura’s live shared by John Yates:

At some point, Laura apparently mentioned something about Photoshopping her conversations because @Talker responded to allegations of Photoshopping with a video scrolling through her DMs with Laura:

“…tHeY pHoTosHopPeD mY cOnvOs” mmm k #lyinglaura SWIPE ⏭ to see me going into my DMs (after I blocked her) to retrieve my ORIGINAL convo with her which is anything but “photoshopped” ??‍♀️

In the string of texts, Laura requested that @Talker post about her ectopic pregnancy “so the hole [sic] world doesn’t hate me and support Aladin.” She also got VERY irate about Deavan’s post and gets into a strange argument about how Deavan found out. 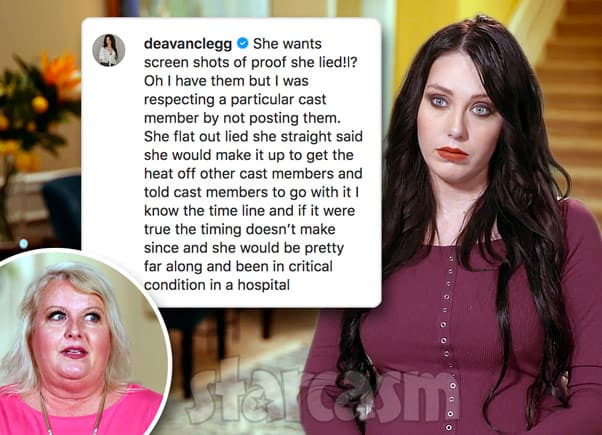 In her live session, Laura also denied reports (including one from @FraudedByTLC) that she has been through menopause — or “metapause” as she calls it. “I am not in metapause, I’m not even approaching metapause,” Laura insisted. “My functions are very much working downstairs.”

Questions about Laura’s fertility also came up when she spoke with Afterbuzz. Laura said that she isn’t too old to get pregnant and revealed that TLC cameras followed her and Aladin to a fertility specialist in Qatar. It’s unclear if TLC plans to air those scenes.

There have been reports that Aladin asked Laura for a divorce while communicating via satellite during the Tell All taping, and that sure seems to fit with what Laura told Afterbuzz! She said that when she came back to the United States, Aladin barred her from returning to Qatar. Laura wanted to return regardless so that she could retrieve her possessions that she left in Qatar, but TLC allegedly refused to provide her with any kind of security if she made the return trip.

“I have lost everything,” Laura summarized. “My baby, husband, son, dog, home in Florida, and everything I took to Qatar.”

I’m sure the debate will continue about whether or not Laura is telling the truth about her ectopic pregnancy, but my advice to her is the same either way — and lines up exactly with what @Talker told her: Get off of social media. Take at least a three-week break. Don’t post. Don’t read what people are saying.

Laura, you are with your dog in Engabao, Ecuador with your friend who owns a cocktail bar on the beach. F***ing relax and turn off all this 90 Day Fiance: The Other Way buls**t.

VIDEO Michaele Salahi not kidnapped – ran off with Neal Schon, guitarist for Journey instead