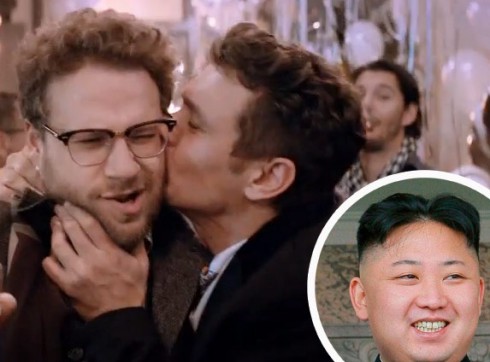 Seth Rogen and James Franco starred together in the apocalyptic comedy This Is the End but could their Hollywood hijinks actually cause the real end of all existence!?!

North Korea has upped their threat level in an attempt to persuade the United States government to prevent the theatrical release of Rogen and Franco’s latest comedy The Interview. In the film, the guys who rode that Pineapple Express portray a talk show host and his producer who score an interview with Supreme Leader Kim Jung-un and are subsequently recruited by the CIA to assassinate him.

North Korea called Seth and James “gangster filmmakers” adding that if the film’s allowed to be shown that it would be considered an “act of war.” A spokesperson was quoted as saying:

“The act of making and screening such a movie that portrays an attack on our top leadership … is a most wanton act of terror and act of war, and is absolutely intolerable. If the U.S. administration allows and defends the showing of the film, a merciless counter-measure will be taken.”

As for Rogen’s counter-counter response?

People don’t usually wanna kill me for one of my movies until after they’ve paid 12 bucks for it. Hiyooooo!!!

How much will it cost Sony to cancel “The Interview”?

Political activist plans to airdrop 100,000 copies of The Interview into North Korea