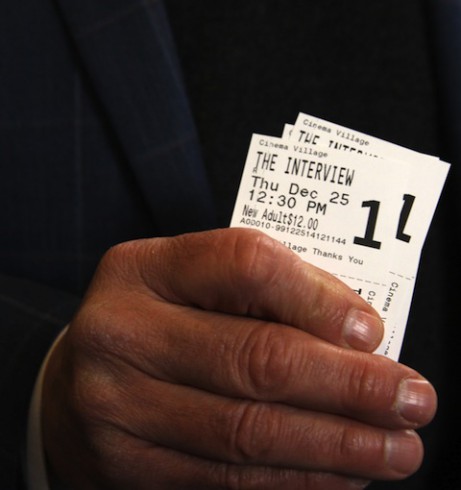 The Interview has a 54% rating on Rotten Tomatoes, which makes it officially rotten and icky and just a little bit better than watching Marky Mark get paid to beat people up instead of doing it for free. It’s also, since its cancellation and terror threat-inspired Christmas Day release, officially more a cause célébre than a movie, a cool thing to do instead of a thing worth doing. Which means that the latest story about the movie is also the most apt and absurd one yet.

Park Sang-hak, a North Korean defector to the South and political activist in his adopted country, has announced his intention to subtitle The Interview into Korean, put it on 100,000 DVDs and flash drives, and air drop the movie over North Korea during a series of daring midnight excursions. The US-based Human Rights Foundation, a non-profit organization “that that promotes and protects human rights globally, with a focus on closed societies,” will to bankroll the operation. Including the tiny balloons. (Yes, all six-figures’ worth.) The HRF folk will hand over the information to the South Koreans at the end of January, at which point Sang-hak will begin delivering the movie, weather permitting.

One thing neither the HRF nor Sang-hak have pledged to bankroll or deliver are the DVD players and computers necessary for North Koreans to watch the movie in the first place. North Korea is one of the poorest countries in the world; household electronics commonplace in the West are extraordinarily scarce. And, given that the movie depicts the bloody assassination of Kim-Jong-Un, it’s almost a certainty that any North Korean who could watch the movie would be terrified to actually do it. This is a good enough idea, but the amount of freedom required for it to work appears to be far beyond what’s available. Plus, you’re trusting Seth Rogen and James “J-Bag” Franco to shatter a cult of personality that’s built on generations of worship. Forgive us for suggesting that that is…unlikely.