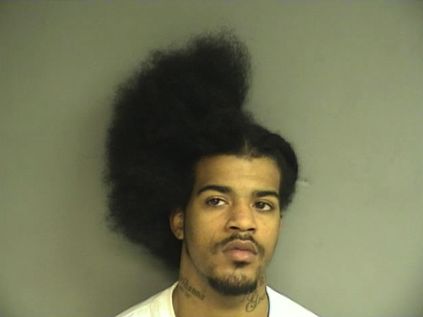 David Davis of New Haven, Connecticut was in the middle of getting a haircut when he allegedly slashed another man in the back with a pair of scissors Tuesday. The incident lead to one of the greatest worst mug shots of all time and a brand new hairstyle called the “halfro.”

In a statement, police said Davis was getting a haircut at 126 Henry St. when the victim approached in what Davis called an “aggressive manner,” so he picked up scissors to protect himself. Davis slashed the man in the back, police said.

Stamford Police Lt. James Matheny said the victim was wearing a heavy coat when he was stabbed so it was difficult to say whether the wounds were serious. He said there was a considerable amount of blood on the man’s clothing.

Davis was later arrested at a nearby apartment after a police dog tracked him down. According to police, there was a warrant out for Davis from a failure to appear in court and they have since charged him in the stabbing incident and are holding him on $5,000 bond.