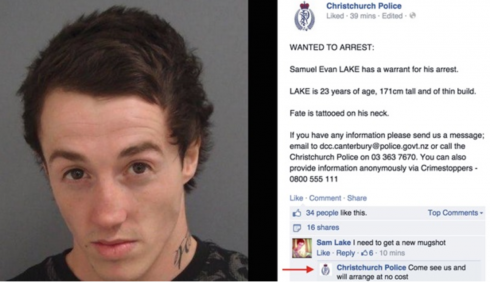 23-year-old New Zealander Samuel Evan Lake responded to a Christchurch Police “Wanted” Facebook posting of his mug shot with a joke, setting himself up to not only get zinged by the police department’s wit, but to be promptly arrested.

He replied to post “I need to get a new mugshot,” to which the police responded “Come and see us and we will arrange at no cost.” Lake then commented, “If only they were as good at finding me as they were with comebacks.”

It turns out his spoke too soon, because within a day the police posted “Thanks to everyone for their help locating Mr LAKE in Wellington tonight!”

Posting wanted mug shots on Facebook is a highly effective way to catch criminals on the loose. A rep for Christchurch Police has said that they’ve had responses by the criminals on Facebook posts before, and many of these responses have led to arrests.

Icelandic teenager denied the right to use her own name