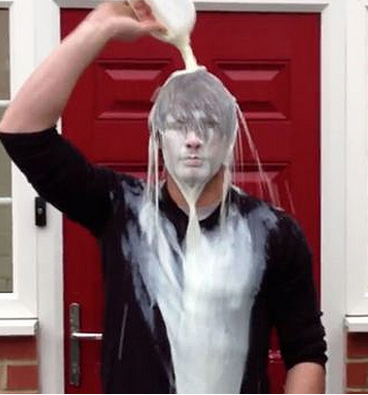 First there was planking, then there was Batmanning and  Tebowing, and now there’s a similar new trend developing in the U.K. that’s really gross: “milking.” Basically you pour a bunch of milk on your head (or have someone do it for you) and take photos and video of the event to post on the internet. People on the internet are so grossed out and mesmerized by the event that they like and share and write articles about it.

22-year-old Tom Morris, 22, a pioneer of the fad who helped with the first video that went viral explained what happened:  “We were just in our kitchen talking about doing it outside Starbucks in Jesmond and thought it would be really funny. We did that, uploaded the video to Facebook and got a load of likes. So then we thought why not just make a video?”

Anyway, his fellow “milker” George Hoyland said: “We didn’t expect a reaction this large, the video was initially intended for our friends. The reactions have been very mixed, the puns people have posted have been great and caused a lot of laughter in our house!”

Planking requires far less cleanup after, and no chance of sour milk smell!