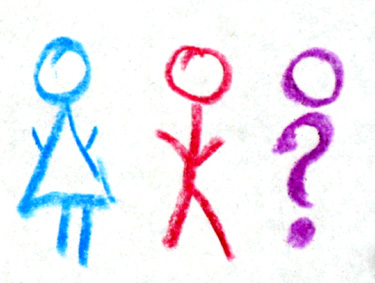 A new German law designed to fight discrimination goes into effect Nov. 1 that will allow a third gender option on birth certificates for babies born with both sex organs, or with “ambiguous genitalia.”

Parents will be allowed to check “undetermined,” or “unspecified,” and allow the children to claim a gender later in life, if they so choose. About 1 in 2,000 children are born “intersex,” which can be the result of more 60 different conditions affecting the sex chromosomes and/or organs.

In the United States the practice is to make a “best guess” at assigning gender at birth, and wait to see how the child develops physically and how they psychologically identify as they grow up. Sometimes surgery is necessarily, but isn’t performed until much later in life unless a condition is life-threatening. This wasn’t always the case in the U.S., however, just a few decades ago when a child was born with both sex organs, surgery was immediately performed to transforms the child into what doctors perceived as the predominant sex.

Being intersex is different from being transgendered because people who are transgendered usually have fully developed sexual organs for either male or female, but feel that their true identity is the opposite. They feel like a female trapped in a man’s body, or a male trapped in a woman’s body.
Intersex people do not have any clear-cut sex-assigning demarcations to begin with, making the issue of “gender” even more confusing.

Germany isn’t the first country to officially recognize a “third gender.” Australia and Nepal both allow adults the option to check “third gender” on official documents like passports. It’s unclear if Germany will allow similar options for adults.