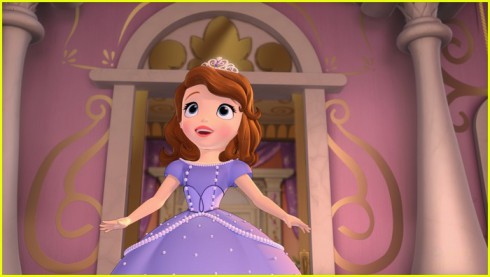 As a dad of daughter royalty myself I figured I’d give all you princess parents a heads up as to when the latest Disney daughter addiction will be premiering.

My house has been echoing with the frequent reminders to “make sure I record Sofia” and the question “when is Sofia coming on again?” Well I have the answer for my little one and you. Disney has set the series premiere date of Sofia the First for January 11th at 9:30 AM EST on Disney and 5:30 PM EST on Disney Junior.

The movie premiere rocked out the ratings and having watched it myself, also known as “daddy duty,” it looks like it has all the makings of another smash hit for the mouse house. The premiere of the movie was the most watched cable telecast for kids ages 2-5 of the past 5 years. All in all, a whopping 5.2 million viewers tuned in.

The series will pick up where the film left off as we follow Sofia’s life in Enchancia.

Hey, if you wanted to be the coolest parent – or at least make Santa look real, real good, you better believe Disney already has a few Sofia themed items (a tad pricey of course) available for purchase here. I wouldn’t mind having one of those Clover (voiced by Wayne Brady) dolls myself.

Who is Bravo’s ‘Work of Art’ mentor Simon de Pury?

Is Tim Gunn too harsh and bitchy on his book tour?