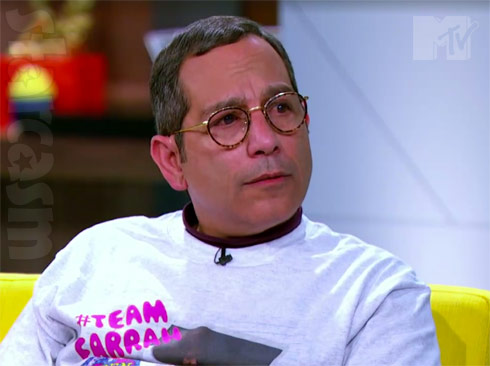 The fallout continues after Farrah Abraham introduced the UK to American-style TV drama by getting into a Jerry Springer-esque chair-tossing brawl with Aisleyne Horgan Wallace during a live airing of Celebrity Big Brother Bits On The Side. It’s a brawl that resulted in multiple injuries–and possible assault charges. Farrah, who was later photographed leaving a hospital in a wheelchair, decided to skip out on the CBB finale in order to avoid putting herself “in a potentially hostile situation.”

Here are a couple of photos of Farrah in her “ON FLEEK” shirt rolling out of the hospital:

Farrah’s dad Michael Abraham, who has always been one of his daughter’s biggest supporters, took to Facebook to defend Farrah and share his thoughts on the “Celebrity Big Brawl” incident:

It’s horrible my daughter was ganged up on in Britain. Vicki Michelle conspired to do this with Ashlyne Horgan-Walkace, and Janice joined them by throwing a chair at Farrah. My daughter is suffering from being bullied and attacked when she was on the Big Brother Bits On The Side Show. She is recovering from being attacked with large bruises and this is affecting her life and work . I pray my daughter gets through this challenged time. I understand people can be jealous and cruel but to be this corrupt – shame on them! They stated this – period. The producers of Celebrity Big Brother and Big Brother Bits On The Side Show should have never have conspired to raise the level of drama at my daughter’s expense. I understand “everything” is about the ratings but they did this with no regard to my daughter’s safety. They knew the tension was there between those other woman and my daughter and should of had security on hand during the filming at that studio. My family and daughter love the UK and its people and have many friends there… We know this will pass so we can once again enjoy the UK, it’s wonderful people, and many fans we have known over the years!

Meanwhile, it’s back to business for Farrah as she prepares to wheel herself to an appearance at the Simply Pleasure sex toy shop in London tomorrow:

It’s unclear when Farrah plans on returning Stateside. All I have to say is: Hurry back Farrah, America just hasn’t been the same without ya! #Farrahmerica

* We initially included an “upcoming” appearance of Farrah’s in Oklahoma with her mom, Debra Danielsen, but that was actually from waaaaaaay back in 2012.