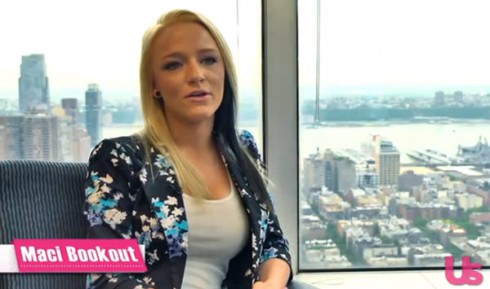 The final season of MTV’s Teen Mom premieres tomorrow night and Maci Bookout sat down with Us Weekly to talk about some of the things we can expect to see in the next few months, what it was like sending Bentley to daycare, and how much she has changed over the last four years.

Maci says early in the clip, “The last season, I think for all the girls, especially me, you just finally see us as women. You know, the past couple of seasons we’ve been transforming from teens, trying to figure out how to become real adult women.” Watching Maci talk I have to confess that is the exact impression I got. The Maci Bookout talking to us in this clip is an adult.

But Maci isn’t the only one continuing to grow up! Maci talks about how all the babies are “little people” now, running around talking. She says Bentley was miked up for every taping this season, as you might could tell from the famous Teen Mom Season 4 trailer scene in which Bentley could be heard repeating the declaration, “Hell no!” 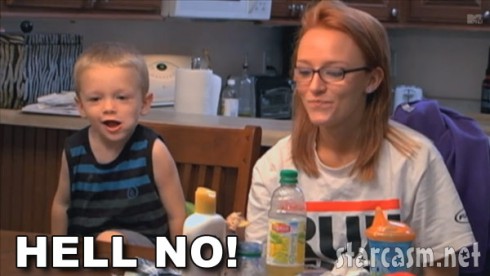 And not only is Bentley old enough to be talking all the time, he’s also old enough to go to daycare. “Him going to daycare was terrible,” Maci says. “I wanted him to go so he would have a couple days of the week where he was just playing all day and could meet kids his age,” she explains. “I [set up care so I] could focus on school, but at the same time, I’m used to having him in my pocket all day every day. The first few days were rough on both of us.”

So what about Maci’s relationship with Bentley’s father Ryan Edwards? “Co-parenting with Ryan is getting better. We’ve done pretty well over the past year. I mean, we still obviously have arguments and things, but … we’re on the same schedule we’ve always been on … we’ve just avoided any confrontation or any drama and just left each other alone.”

And how about her relationship with Kyle King? “Honestly it kind of goes backwards from what I’m sure people are expecting. We grow. We ended up buying a house together. Pretty much we were on the same track that we always were.” But what about their split? “They don’t show much of our break up because that was after we had finished filming.”

So how did she break the news of her break up with Kyle to Bentley? “I really didn’t tell him anything about me and Kyle breaking up, I just told him that we were going to move into a different house.” And how did Bentley take the transition? “He’s actually handled it pretty well.”

“It’s all bittersweet, but I’m ready to move on,” Maci says of the end of Teen Mom, “and let people realize I’m not a teenager any more. I’m actually an adult – like a woman. [she laughs] I’m not 16.”

Is Teen Mom 4 on the way? Which 16 & Pregnant stars would you want to see?