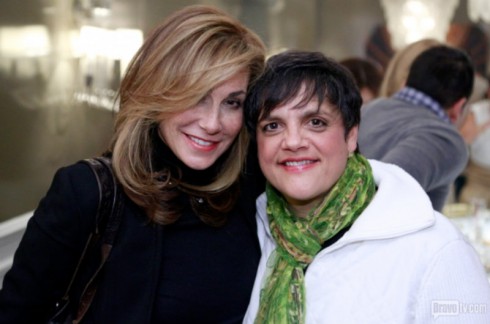 On this week’s episode of Real Housewives of New Jersey, Rosie Pierri introduced her new girlfriend, Ellen Minkin, to the family.

“We feel very, very comfortable, like I’ve known her for all my life,” Rosie told the Bravo cameras. “We get silly together. We’ll dance in the kitchen. We have fun with each other. That makes it so much easier to be around someone and fall, you know, in love with them.”

During dinner with the family, Ellen returned the praise for Rosie.

“I thought she was beautiful,” Ellen said of her first impression of Rosie upon meeting at a bar.

The ladies’ romance seemed to be so serious that Rosie’s brother-in-law Richie Wakile even offered to be the ring-bearer at their hypothetical wedding.

Unfortunately, it sounds like the ladies’ love has gone cold in the months since the show was filmed. Rosie first confirmed the relationship’s demise after the episode aired by telling a Twitter follower she’s been single again “for some time.”

“For the record that was then and this is now IT IS OVER!!! Ms.right and still out there waiting! She wasn’t it!!,” she elaborated in another tweet before adding there are no hard feelings.

However, based on new comments from Ellen, that may not be the full story.

“I’m sorry I did it, I’m sorry I went out with her, I feel like she used me,” Ellen, a local TV news writer, told WetPaint of appearing on the show. “We really weren’t in a heavy-duty relationship. We were just very good friends, and she makes it seem like we were together and we had this whole relationship. Really, I was just doing her a favor, and now I’m paying the price.”

Now Ellen said she’s so frustrated by the things went down that she believes Rosie intentionally “manipulated” her.

“I shouldn’t have [gone on the show]. I was really just trying to be friends with her and help her,” she said, adding Rosie is too “set in her ways” to have a genuine relationship. “I think I was really nice to her.”