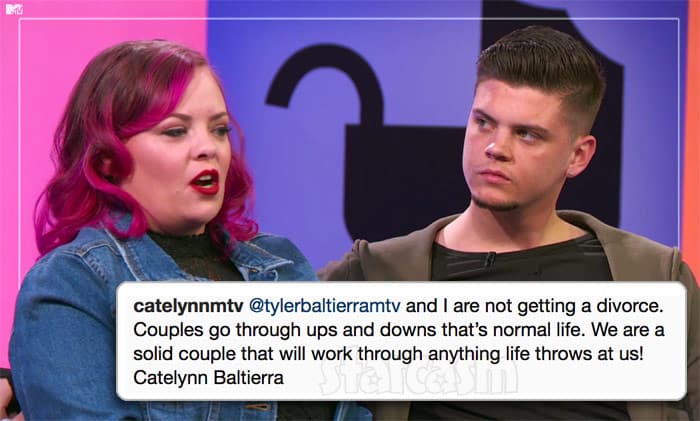 The Teen Mom dramaverse all but exploded earlier today when people noticed that OG mom Catelynn Baltierra was using her maiden name Catelynn Lowell on Instagram, sparking rumors of a split from husband Tyler Baltierra. Catelynn has since changed her last name to Baltierra and responded to the split rumors.

“[Tyler] and I are not getting a divorce,” Catelynn captioned a photo of herself and Tyler with the text “#BREAKINGNEWS Divorce?!” placed over top. “Couples go through ups and downs that’s normal life,” she continues. “We are a solid couple that will work through anything life throws at us! Catelynn Baltierra.”

UPDATE – Catelynn has since responded on Facebook as well, and she addresses the fact that she recently took a trip to Florida without Tyler:

So because a married couple doesn’t go on a trip together, they are automatically headed for divorce? This is the problem with this world, you all make assumptions out of nothing. Tyler was is a completely different state while I came to visit my family in Florida with my father so that I could meet my niece and see my great grandmother who isn’t doing so well. Until you hear it from us personally, ignore the posts. We have our issues as a couple just as any and all couples do but that doesn’t mean we take it to the courthouse to file for divorce we actually work through it together as a team.

The Lowell name was first notably pointed out on reddit, and in the comments section of that post it was observed by numerous commenters that Tyler and Catelynn were not following each other initially, but that has now changed as well. [I feel I should point out that it is believed that Catelynn may have been using the last name Lowell all along.]

Part of the reason that the split rumors were able to build traction so rapidly is because Catelynn using her maiden name was just a spark added to the rumor fuel spilled by Tyler in the form of a series of poems posted no social media expressing his pain and frustration. Some examples from Tyler the Creator: 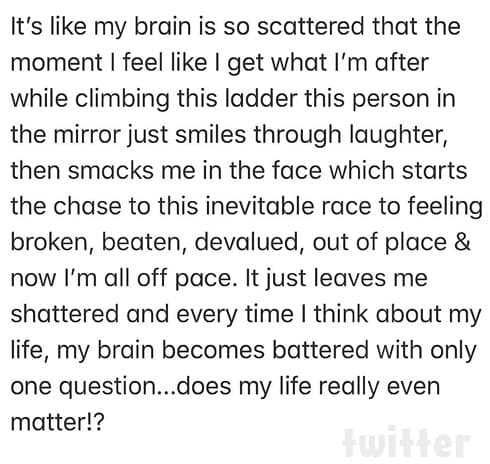 I have always loved writing & as a kid I used to write poetry, I had pages full of it! But I gave it up when I got a little older & ended up throwing it all away. I’ve been inspired recently to pick it back up & I’m on a mission to refill my notebook! #SelfCare #MyOwnTherapy pic.twitter.com/CGyzmWqcsu

Why do I always do this to myself
Why do I always ignore what’s safe for me & instead go search for some fatal battle, like I would rather be dead or let the devil take the handle from me. What’s wrong with me!? Whats wrong with this brain of mine!? ???? https://t.co/o4fHSkdHqE

Whats wrong with this brain of mine. How can I just sit here & build up so much fucking rage & pain inside. It’s like I’m my own worst enemy & fighting this demon inside of me possesses all of my energy, so where’s the preacher at? I’ve been cursed & I don’t think I’m coming back

Tyler explains that poetry is not something new for him, but something that he is revisiting as a form of therapy for himself. “I have always loved writing but I stopped writing poetry when I was a kid & recently I’ve been inspired to pick it up again & I gotta tell ya, what comes out of this brain of mine onto paper…Freaks. Me. Out. My brain is a way darker place than I thought ???”

After some fans expressed concerns over Tyler’s well being, and others openly wondered if he should be posting these sorts of therapeutic poems on social media, Tyler responded: 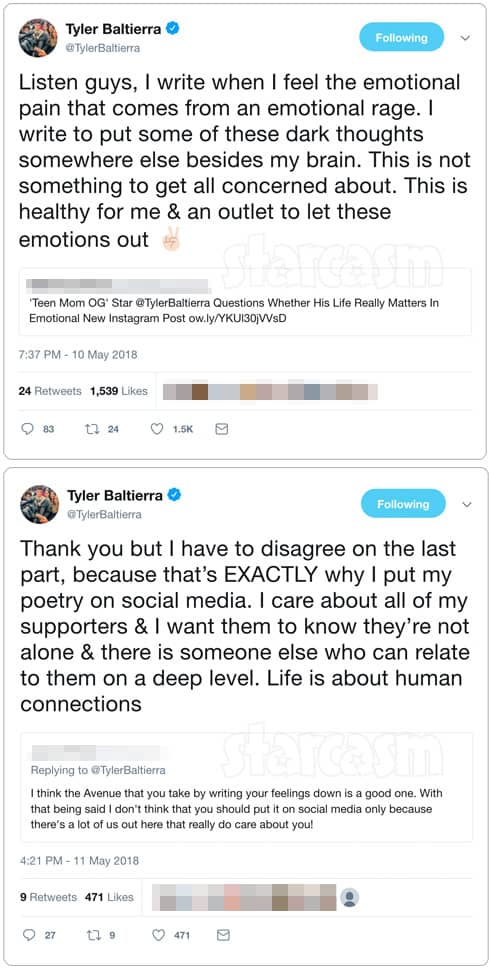 Tyler also received some criticism of his poetry, and he spit back with more rhymes:

Yeah I hear all you b!tches, I hear all you hatin & tryin to belittle, but I am not brittle & you got me glitchin if you think I’m switchin, so stop all your flexin & stop all your bitchin, your keyboard words can’t put me in stitches #KeepHatin #ItsFuelWhenImWritin ??????

Tyler has been posting A LOT about rapper Witt Lowry on social media, so I feel pretty confident that Tyler will be (or already is) following in the OG footsteps of Farrah Abraham and Debz OG by trying his hat at music. I can’t imagine that with the amount of promotion he is giving Witt that he isn’t receiving some help and/or rap advice in return. So, are you ready for Machine Gun Tyler?

Why are so many celebrities announcing divorces lately? Here’s a good explanation…