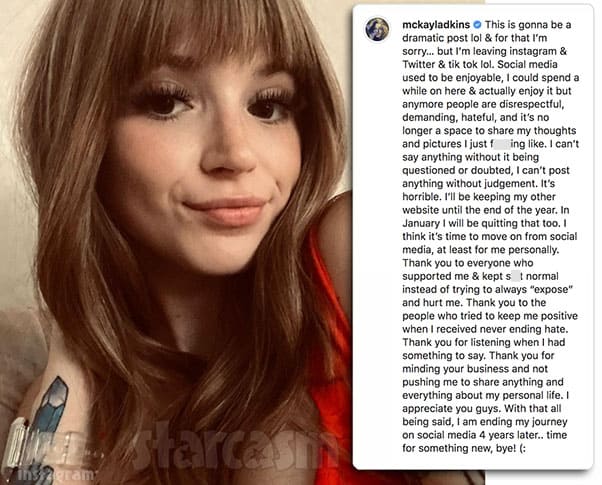 Former Unexpected mom McKayla Adkins is no stranger to dealing with negativity online. But, it seems the the constant barrage of criticism from “disrespectful, demanding, hateful” people has gotten too much for the 21-year-old as she announces she is quitting all social media platforms. She says that she will also be leaving her “other website” in January, which is in reference to her successful OnlyFans account.

Social media used to be enjoyable, I could spend a while on here & actually enjoy it but anymore people are disrespectful, demanding, hateful, and it’s no longer a space to share my thoughts and pictures I just f***ing like. I can’t say anything without it being questioned or doubted, I can’t post anything without judgement. It’s horrible.

McKayla then addresses the fate of her OnlyFans account without mentioning the site by name due to an aggressive Instagram crack down. “I’ll be keeping my other website until the end of the year. In January I will be quitting that too.” McKayla did not reveal what she plans to do for work starting next year.

If McKayla follows through with her social media retirement it will be quite a drastic transition. McKayla had a very successful YouTube channel as a young teen prior to being cast for Unexpected. As we reported in our initial post about the cast of first season of Unexpected before the series premiere, McKayla’s YouTube video explaining how she found out she was 16 and pregnant had almost a million views before it was announced she would be on TLC.

Surprisingly, McKayla didn’t mention YouTube specifically in her online retirement announcement. I am guessing that is because she simply doesn’t post there much any more. She only has one video up from the past 14 months, which was soon after she announced her third pregnancy. (Unfortunately, McKayla would later confirm that she suffered a miscarriage.)

“I think it’s time to move on from social media, at least for me personally,” McKayla continues, before acknowledging those fans who have been supportive. “Thank you to everyone who supported me & kept sh*t normal instead of trying to always ‘expose’ and hurt me. Thank you to the people who tried to keep me positive when I received never ending hate. Thank you for listening when I had something to say. Thank you for minding your business and not pushing me to share anything and everything about my personal life. I appreciate you guys.”

McKayla concludes her announcement and signs off: “With that all being said, I am ending my journey on social media 4 years later.. time for something new, bye! (: ”

The social media retirement comes in the middle of an eventful year for the mother of two. In addition to adapting to life as an online sex worker in her professional life, McKayla has had a series of ups and downs in her personal life. As mentioned above, McKayla announced her third pregnancy back in early May before later revealing that she lost the baby due to miscarriage.

Soon after losing the baby, McKayla married her fiance Ethan Tenney in a small ceremony at her step-grandad Timothy’s house in Salem, Ohio on May 22. She recently revealed that she and Ethan have closed on a house and they appear to already be in the process of moving in. Also, McKayla just celebrated her 21st birthday this week.

What do you think? Will McKayla really leave social media for good? Being that she is only 21, I would have to assume she will be back at some point, the only question is when. Let us know what you think over on Instagram: