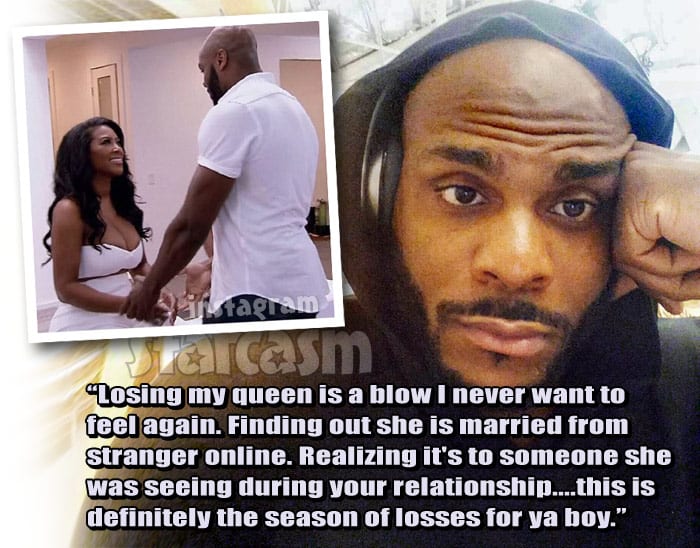 The Real Housewives of Atlanta‘s Kenya Moore surprised everyone by getting married to her mystery beau in St. Lucia in a beach ceremony last weekend, and the reigning “King of Last To Know” Matt Jordan was exactly that as he took to Instagram to share his hurt over the surprise nuptials and “losing my queen.”

“As if the embarrassment from the show wasn’t enough,” Matt begins his caption to the photo below, before providing a pitiful laundry list summation of his life since joining The Real Housewives of Atlanta: “The false aligations [sic] of domestic violence, the unwarranted restraining order, the loss of business opportunities, money. My personal & professional image.” Those burdens are not too much to bear for the John Stockton and Karl Malone of life, though. “I can deal with that,” Matt affirms. But “losing my queen is a blow I never want to feel again.” 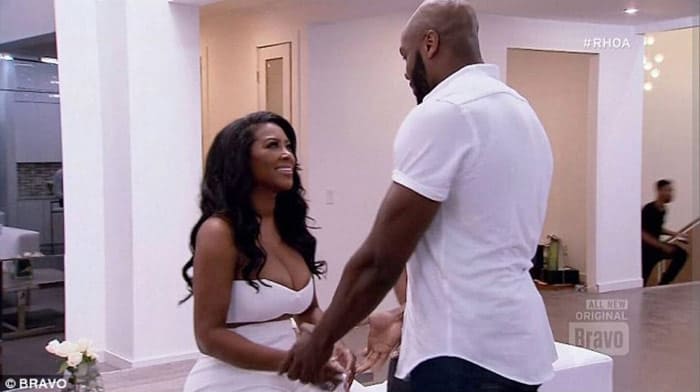 Matt continues, revealing that he found out about Kenya’s wedding just like the rest of us:

Finding out she is married from stranger online. Realizing it’s to someone she was seeing during your relationship….this is definitely the season of losses for ya boy. TKO!! I made alot of mistakes, but I loved & cherished her. I can’t lie the news of this rocked me. I pray her heart is in good hands. Take care of her. She was everything to me.

After very publicly posting those sympathetic words to his 63,000 followers, Matt wants to emphasize that he isn’t looking for any attention. “Just requesting to be left alone after this people,” Matt humbly writes. “The fight for her heart is over. I lost!! Peace…. #tko”

Apparently, Matt isn’t the only one heartbroken over Kenya tying the knot–Fameolous reports that RHOA producers are upset at Kenya for keeping them out of the loop! “Kenya Moore purposely dismissed production from attending the wedding or filming because she wanted it to be separate from her reality television life,” the site’s article says. “Real Housewives Of Atlanta is a scripted show for the most part, so Kenya didn’t want you guys to think that her marriage was just a flute for ratings.”

Kenya also reportedly does not want her husband on the show, and doesn’t want any video or photos from her wedding to be used on RHOA. As you might imagine, that seriously handcuffs show producers as far as her storyline for next season. And, adding injury to injury to injury to injury, Bravo reportedly wanted to have Matt Jordan back on the show–but Kenya’s wedding put the kibosh on that! “Production wanted her and Matt to hash out their differences one last time on television,” Fameolous’ source says. As a result, “Bravo may be cutting her screen time down.”

Although she doesn’t want her wedding photos used on the show, Kenya posted a couple on Instagram:

A good man is hard to find but true love is even harder. I found both. ????? #truelove #agoodman #wife #god #happiness #crazyinlove #kenyamoore #hewhofindsawifefindsagoodthing

To my husband, Happy Father's Day to you and all the great Dads. We met a year ago but didn't speak again until December. Since we reconnected you have been my everything, my one and only, my heart…I love you. #devotedwife #family #happyfathersday #truelove #bliss

Congratulations to Kenya once again — and our sympathies go out to poor, poor Matt Jordan. Chronicling Matt’s story over the last couple of years has been quite the pity-inducing endeavor. With this latest chapter of heartbreak and his “season of losses,” I felt compelled to share a few songs to pay tribute to Matt, who most certainly seems “Born To Lose,” “Lonesome Number One,” and a true “Legend In My Time” as far as failing at love.