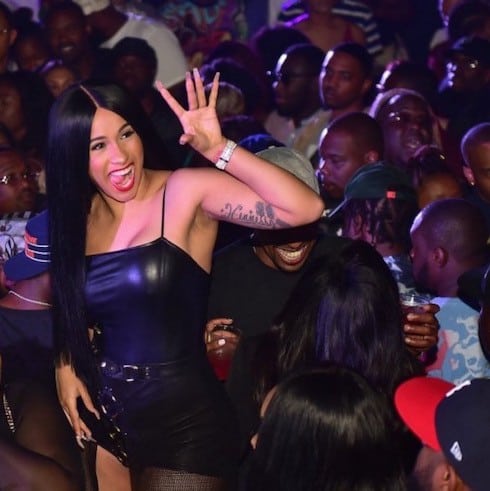 Other than dealing with rumors that she and boyfriend Offset are expecting a baby, the most common bit of gossip that Cardi B has to deal with involves her teeth. The “Bodak Yellow” superstar has been open about her new grill since having some intensive dental work done last year. In fact, Cardi B’s teeth were a major topic of conversation during one of her first Breakfast Club interviews, way back in the summer of 2016.

Now that “Bodak Yellow” has gone to #1, though, Cardi B’s teeth are getting a whole new round of scrutiny–especially because of the shout-out her dentist gets in the song. Dr. Catrise Austin, who bills herself as The Queen of Smiles, even says that her phone is blowing up with inquiries from Cardi fans who want to talk about getting some dental work of their own. As The Queen recent explained to TMZ,

Since the song…went out, things have been incredible. Just this week I’ve gotten so many calls, just because people wonder ‘Who is Cardi B’s dentist?’ My business has actually tripled. And I have seen so many different people…Cardi B has inspired [people] to improve their smile.

It’s worth pointing out that Dr. Austin’s clientele already included some of the biggest names in hip-hop and R&B, including Toni Braxton, Common, DJ Khaled, and Busta Rhymes. But it’s Cardi B’s teeth that are really helping the newly famous dentist break into the mainstream.

For comparison’s sake, here’s the good doctor and her most famous client, explaining the now-legendary story of Cardi B’s teeth herself:

As @iamcardib dentist, I vowed to help #CardiB shut down some of her haters who made fun of her smile….here is a summary of our #smilestory! Video 1, #CardiB shares with @billboard the inspiration behind various verses in her #Billboard chart topping song #BodakYellow! Cheers to the #haters that inspired my favorite line… Got a ?and fixed my ?. Video 2 (Swipe Left), I said we were going to shut them DOWN on day 1 of her #smilemakeover!!!!! #GetSmiled by #TheQueenofSmiles? #cosmeticdentist at @thesmilist on 57th Street in #NewYork. Call 212-262-6054 or request an appointment 24/7 on www.vipsmiles.com. For more info about @drcatriseaustin visit www.thequeenofsmiles.com

And we’ll leave you with this unintentionally hilarious video of Cardi repping for her dentist. Watch as she struggles to keep from dropping her usual F-bombs left and right:

Choosing to improve your smile can be a life changing experience! #BodakYellow chart topping #HipHop star @iamcardib says, "Why not go to THE BEST"? If you are SERIOUSLY looking to take your smile and life to the next level like #CardiB, then pick up the phone and take the first step of booking a #smilemakeover consultation! #GetSmiled by #TheQueenofSmiles? #cosmeticdentist at @thesmilist on 57th Street in #NewYork. Call 212-262-6054 or request an appointment 24/7 on www.vipsmiles.com. For more info about @drcatriseaustin visit www.thequeenofsmiles.com

Can Kanye West run for President? He heats up speculation with new 2020 pledge