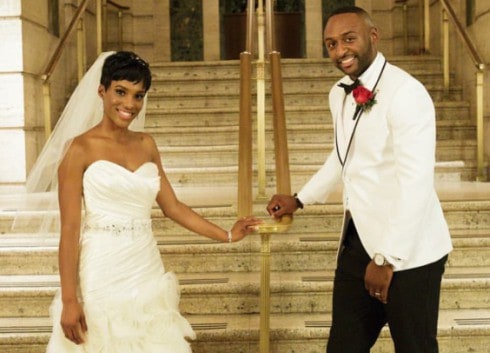 Nate and Sheila Duhon have been one of Married At First Sight’s all-star couples. Not only did they decide to stay married at the end of the show, they have remained together months after filming wrapped and seem blissfully happy! That is, until this weekend…

Sheila used her social media accounts to announce that her husband of just over a year has been cheating on her.

“Just got a call from the woman who’s been sleeping with my husband,” Sheila revealed. “The same woman who he called on the honeymoon. … He admitted it. … When you’re done, you’re done.”

Anyone who follows Sheila and Nate know they are deeply rooted in their faith — a faith that doesn’t encourage divorce. So, what does this mean for the couple moving forward?

“I honored my covenant with God,” she explained. “God said adultery is means for divorce.”

She also posted details about Nate’s infidelity on Facebook. She says the reason she’s blasting the news all over social media is simple: “Our marriage was public. I’m ending it publicly. There’s no turning back.” 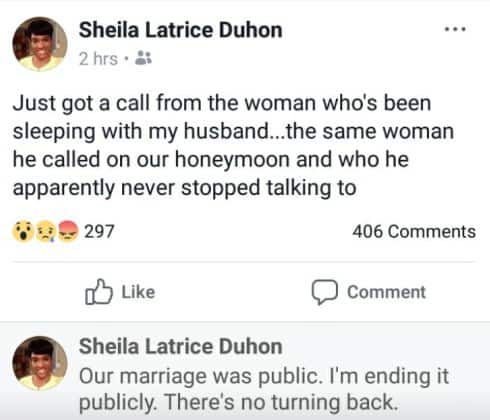 Before I met you, God sent me word that you were coming (my cousin’s dream, the prophecy, and the constant reminders along the way). I believe that He did that because He knew that it wouldn’t always be easy and He was preparing me. So no, it won’t always be butterflies, lollipops, and puppies in the Duhon household; but there will always be love, God, and a desire for growth. As we celebrate our first year, know that I am committed to you, our marriage, and our future After all, you and I are just catching up to where God already is. I LOVE YOU, I LOVE YOU, I LOVE YOU! Happy Anniversary @nateduey. Get ready, the BEST is yet to come! #onedown #forevertogo #anniversary #blacklove #journey #godsplan #biggerthanme #destiny #marriedlife #commitment #growth #love #marriage #realtalk #livelovelaugh #worthit #future #life #relationshipgoals #justthebeginning #duhondynasty

No word yet from Nate regarding the cheating allegations against him.