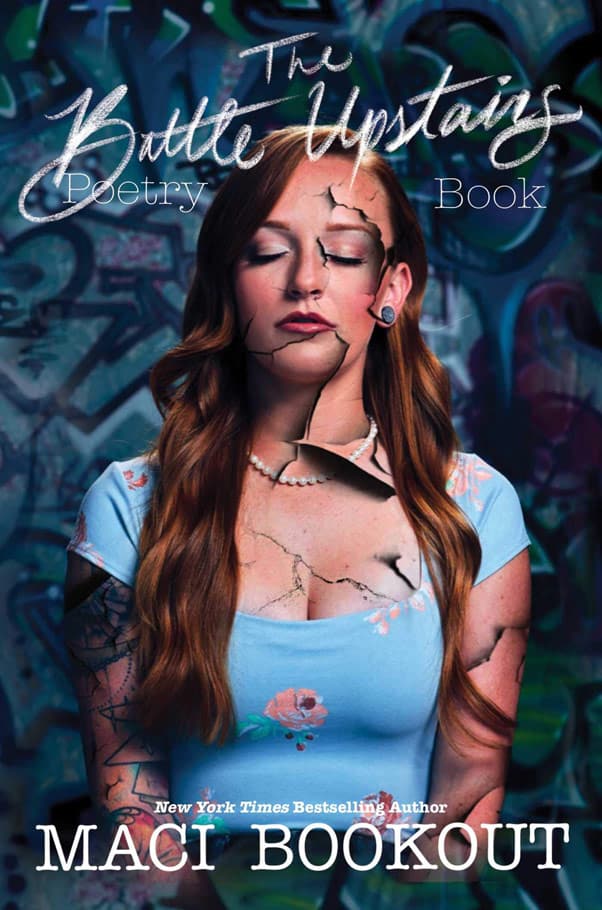 “I have experienced SO MANY emotions writing this book and bringing it to life!” Maci began her announcement on multiple social media platforms. “Years of putting pencil to paper, trying to make sense of life and myself. Truth be told, releasing this book scares the hell out of me – but if I have ever wanted anything, it was for my poetry to be published. The time has come!”

Maci reveals that the book is currently available for pre-order on Amazon, and is set to be released on September 1. “My heart is in this book – be open, be gentle, and read between the lines once in a while,” Maci adds.

The cover of The Battle Upstairs features a portrait of Maci shot by celebrity photographer Robby Klein, which was then altered by tattoo artist Mike Diaz. Mike also contributed illustrations for the interior of the book as well. “Thank you @mikediaztattoos from the bottom of my heart, for your time and hard work,” Maci wrote. “This book would not be complete without your artistry and illustration.”

Amazon indicates that the book will be 112 pages. Here is the publisher’s description for the book and the “About the Author” for Maci:

In this eclectic collection of free verse, Maci Bookout lays bare the pain of past heartbreak, while revealing the strength of womanhood and the power to be found in the truth. Taking cues from the style of Rupi Kaur and Charly Cox, Maci’s poetry tells a picturesque tale that weaves through her life thus far, from the emotional collapse of past relationships to the serenity and fortitude she found within herself.

Maci Bookout starred on the MTV reality TV show 16 and Pregnant and went on to become a fan favorite on the spin-off Teen Mom. Known for her down-to-earth Southern charm and level-headed personality, Maci has earned the respect of teens and adults alike with her courage under pressure and her mature reflections on teen pregnancy and motherhood. Maci has appeared on numerous talk shows and spoken to many educational groups on teen pregnancy prevention. She consistently receives praise from the audience for her candidness, down to earth personality, and refreshingly insightful commentary. Maci also makes personal appearances at marketing/promotional events, keynote speeches, colleges, TV shows, sporting events, and other unique spokesperson/appearance opportunities. In addition to being a public speaker, writer, and TV/radio host, Maci is a mom to three children and recently married Taylor McKinney.

The book of poetry adds to a growing shelf of titles for the MTV star. Maci published her memoir Bulletproof in July of 2015. That was followed in February of 2017 with an adult coloring book titled The Maci and Taylor Wedding Album.

In June of 2017, Maci published a thematic follow-up to her memoir titled I Wasn’t Born Bulletproof: Lessons I’ve Learned (So You Don’t Have To) in which she “offers down-to-earth, practical advice on how to navigate life, love, and everything in between.”

Congratulations to Maci! And I don’t just mean in regards to her book. She and Teen Mom 2 star Chelsea DeBoer have both found stability with healthy new relationships after getting pregnant as teenagers with guys that turned out to be even worse than absentee fathers. They both seem to have done a great job of managing the fame and money they have received from doing the show as well.

I know fans often criticize Maci and Chelsea for having relatively boring story lines (outside of their baby daddy drama), and fans also criticize the show for no longer telling the stories of young mothers who are struggling to get by after getting pregnant as teens. I’ve always argued that the “struggling teen parents” concept was the mission of 16 and Pregnant, and not necessarily Teen Mom. The Teen Mom shows were always about the stories of the specific mothers, and those stories included the fame and money that went along with being on a popular reality show.

All of that being said, Maci and Chelsea’s stories send a fantastic message to young women and men about the impact of getting pregnant at a very young age. We all watched as they both went through hell with their “cool” boyfriends. And we all got to watch as they struggled to move on, eventually finding significant others who were supportive, mature, and loving — to them and their children. From that foundation, they were able to experience having children in way that wasn’t as stressful or dramatic. That sends an incredibly powerful message that is really at the root of the most positive aspect of the series.