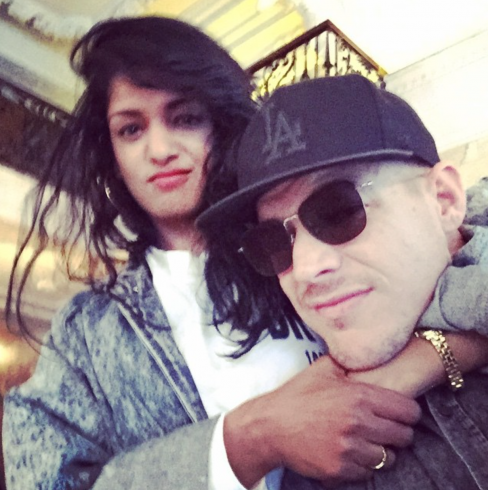 A few weeks ago M.I.A. shared an old photo her ex-boyfriend Diplo posted of them during happier times, but that didn’t stop her from slamming both him and Oprah in a new Rolling Stone> interview.

She says the DJ “shat on every good thing that was happening to me, and I just didn’t enjoy it because if I was on a cover of a magazine he’ll be like, ‘What do you want to do, like be on the dentist waiting room table? Like, is that what a magazine is for? It’s corny. Like, don’t do magazines.'”

“When I got signed by Interscope, he literally smashed my hotel room and broke all the furniture because he was so angry I got picked up by a major label and it was the corniest thing in the world that could possibly happen,” she said.

“So the whole two years I was with him, I just let him dictate. I basically had this man dictate to me how everything in America that I experienced was completely, like, irrelevant and it was nothing. So it was kind of a weird time for me,” she remembers. “It was only afterwards, when I went into the second record and I went into it without him, I got to enjoy that by myself. But on the end of that I ran into another man, so the window of me actually being alone, single and a female and being empowered and enjoying what I created was very, very small. Oh, 100 percent. It’s only now when I look back at it in 2015, I can see that he was just jealous and he couldn’t wait to be Taylor Swift’s best friend and date Katy Perry.”

M.I.A. (real name ) then went on to explain her beef with Oprah. When she met Oprah in 2009, she had nice things to say about the encounter on Facebook, but now she’s singing a different tune. “She [Oprah] squeezed my hand so hard, I was convinced she cared,” M.I.A. wrote at the time.

“In 2009, Time nominated me for one of the most influential people of the 21st century or something and I met Oprah at that party,” M.I.A. now recalls. “And I was like, ‘Hey, people are gonna fucking die in my country. Like, please pay attention.’ And she was like, ‘You’re sh!t because you were rude to Lady Gaga and I’m not talking to you. And I’m gonna interview Tom Cruise jumping on my sofa, so f**k off.”

When the Rolling Stone reporter asked M.I.A. if Oprah really acted like that, M.I.A. stood by what she was saying. “Yeah, she didn’t talk to me. She shut me down. She took that photo of me, but she was just like, ‘I can’t talk to you because you’re crazy and you’re a terrorist.’ And I’m like, ‘I’m not. I’m a Tamil and there are people dying in my country and you have to like look at it because you’re f**king Oprah and every American told me you’re going to save the world.’

When asked to explain why she brought up the word “terrorist,” M.I.A. said everyone was calling her a terrorist at the time. “It was horrible because even my friends and people in the music industry had to disown me. The pressure got so intense. The media turned against me, my ex-boyfriend turned against me and became a pawn to actually do that and, yeah, it’s like it was this really difficult time — to be like, no, this is real, this is real, this is real. It was a really difficult time because I felt that what I’d done up to that point is offered really positive things and had music and fashion and visual stuff that represented something that was positive and not negative. I don’t know, you could debate the gunshots [played over the music at her shows], but generally if you came to my show you did not go away feeling sad and you did not go away in a negative way. You went away having experienced a whole bunch of happy things and you felt empowered.”