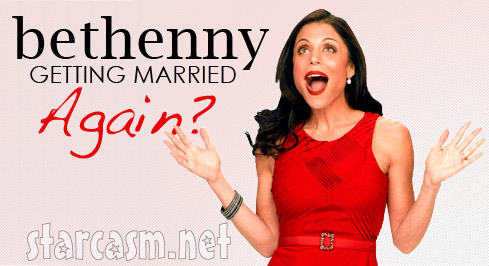 Just days prior to the premiere of her own reality show Bethenny Getting Married? Bethenny Frankel dropped a bomb in an interview with Life & Style revealing that her marriage to Jason Hoppy was not her first! She tells the magazine that she married good friend Peter Sussman in 1996, but that it only lasted eight months.

“We were best friends for five years, and he always wanted to be more,” says the star of The Real Housewives of New York City. They dated for two years before tying the knot. Bethenny tells the magazine that the union provided security but was devoid of passion. “I felt like, ‘This is really it? This is the person I’m going to spend the rest of my life with?'” she says. “You can’t go to bed with a piece of 8-by-10 paper.”

She shares the wisdom of her own hindsight saying, “I loved him because of how much he loved me. I got married too young. I didn’t wait for the great love of my life.”

I don’t know how in the world this story slipped through the cracks! As a celebrity blogger that follows all of the Housewives stories closely, I’d like to apologize for not doing my job better. Bethenny Frankel was married for eight months! I still can’t believe it!

Betherella and her second husband Jason Hoppy in February of 2010

he New York Daily News published a photo of him at the 2007 Los Angeles Film Festival premiere of the movie How To Rob A Bank. (CLICK HERE for the original photos from Wire Images.) This Peter Sussman hails from the same hometown (Great Neck, NY), and is the same age (41) as the Peter Alan Sussman that Bethenny Frankel married (according to Intelius.)

If the NYDN is correct, then here is Bethenny Frankel’s ex-husband’s bio from the How To Rob A Bank web site:

Prior to working on “How To Rob A Bank,” Peter Sussman was Vice President of Development at Arthur Sarkissian Productions.

His next project is the “Prince Test” that will be directed by Noah Wyle this summer. Other projects include: “Thieves” at Warner Independent that acclaimed filmmaker Lodge Kerrigan is writing and directing, plus “Weddingville” written by Eve Ahlert and Dennis Drake.

Prior to working for Arthur Sarkissian Productions, Sussman was Director of Program Development at Fox Sports. During his seven years at the network, Sussman helped develop programs such as “Best Damn Sports Show,” “Beyond The Glory,” “ In The Zone” and “Sports Geniuses.”

Sussman began his career in the training program at ESPN in Bristol, CT upon graduating from Clark University with a Bachelor of Arts degree in 1991.

No word if Bravo plans on changing the title of Bethenny’s new show to Bethenny Getting Married Again?

In Bethenny’s memoir: A Place of Yes she explains that she married Peter Sussman at 26 to escape the instability of being a fledging actress, and because she felt like her time was running out to get married. She writes:

I felt like if I didn’t marry Peter, who loved me so much ans was such a good friend, who had such a wonderful welcoming family, that I was never going to get another chance. Peter used to tell me that nobody would ever love me as much as he did, and I believed him. And that terrified me. I wanted stability and upward mobility, and I saw a chance for that with peter. So I quit acting, took a regular job, and married him.

Bethenny goes on to say that after she left Peter she immediately began a relationship with his good friend Larry (who was an usher at their wedding.) The relationship was scandalous in their circle, and extremely passionate, but it was volatile and ultimately didn’t work either.