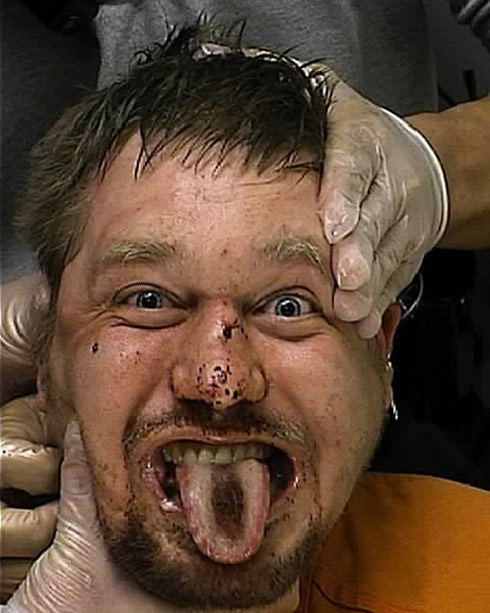 Ahhhhhhhhhhhhh!!!!!!!!! That is an official mug shot for 29-year-old Kelsey Smith.

This of course happened in Florida as the 29-year-old Deltona man suspected of driving under the influence (of Satan?) was arrested a week ago.

Here is a brief summary on how not to get arrested and end up in the mug shot hall of fame:

Dude was parked at an intersection with his car running when an officer pulled up and immediately could smell the alcohol emanating from his Audi. The officer noticed that his eyes were bloodshot and that his speech was slurred. Smith refused a field sobriety test. Dude was placed under arrest and removed from his Audi. Then dude refused to cooperate so the officer tased him. He still resisted when the cops tried to handcuff him. Another deputy used a stun gun on his back.

They finally got him cuffed and took Smith to a substation where he reluctantly agreed to a breath test but got violent again. The officers pinned him up against the side of a patrol car and dude decided that he would repeatedly smash his face on the hood of the car.

As the blood dripped down into his mouth he started spitting blood at the officers yelling that he had AIDS and Hepatitis C. They eventually had to put a “spit hood” over his face.

Once he got to the jail he was still in a fighting mood so they had to hold his self-mutilated face in place for the mug shot as seen above. He was charged with DUI and resisting arrest – according to authorities this was not bath salts related.

Kids. Don’t try this at home!

Three more women accuse Bill Cosby; one was 15 at the time