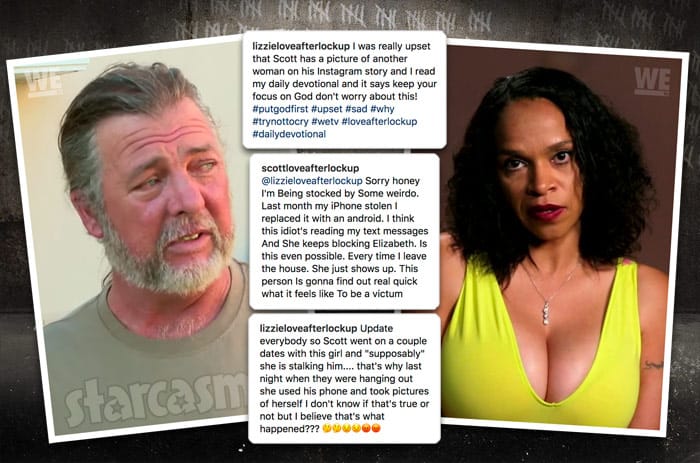 The tensions are running high between Love After Lockup lovebirds Scott and Lizzie after a photo of a mystery woman popped up on Scott’s Instagram story.

Here is the image that started everything, thanks to @LoveAfterLockupSavageEdition: 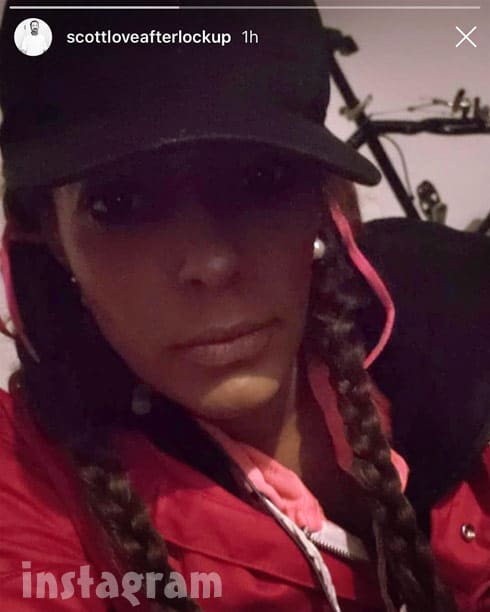 After the photo was posted, Lizzie took to Instagram to express her frustration. “I was really upset that Scott has a picture of another woman on his Instagram story,” she wrote along with a photo of her daily devotional that helped soothe her anger. “I read my daily devotional and it says keep your focus on God don’t worry about this!” She added a string of hash tags that included #putgodfirst, #upset, #sad, #why, #trynottocry, #wetv, #loveafterlockup, and #dailydevotional.

Lizzie’s daughter Jazmyne chimed in, and she was quick to mount up on her mother’s apparent high horse and throw her potentially former future step-dad Scott squarely under the bus:

@scottloveafterlockup what the actual f**k, I’m looking at all this bullsh*t about you cheating on my mom with another b*tch. Like who the f**k is she? Was she there for you when you broke down? Was she there to pick you right back up? Everyone has issues even you! I’m not saying my mom doesn’t have any but my mom was there for you just like you were there for her. We’re not talking about money we are talking about love and feelings and commitment. You made a promise, you got down on one f**king knee and asked her to marry you. Now look at you. F**king sh*t up. I’m disappointed, I thought I could trust you to care for her to love her. She’s calling my ass early in the morning telling me all this sh*t. I’m obviously gonna stick up for her. When you see this Scott get your ass out of bed and give me a call so I can b*tch your ass out some more. ??????????????????????????????????????

When Scott did get out of bed, he explained that the whole thing was just a big misunderstanding caused by a “stocker” who has his old phone:

@lizzieloveafterlockup Sorry honey I’m Being stocked by Some weirdo. Last month my iPhone stolen I replaced it with an android. I think this idiot’s reading my text messages And She keeps blocking Elizabeth. Is this even possible. Every time I leave the house. She just shows up. This person Is gonna find out real quick what it feels like To be a victum

Scott also added in another comment: “Honey I’m pist off right now whoever did this is gonna pay.”

Apparently, Scott spoke with Lizzie and filled in a few more blanks by revealing that this “stocker” isn’t some random woman, but someone he dated “a couple times” after he and Lizzie became engaged:

LIZZIE: Update everybody so Scott went on a couple dates with this girl and “supposably” she is stalking him…. that’s why last night when they were hanging out she used his phone and took pictures of herself I don’t know if that’s true or not but I believe that’s what happened??? ??????

COMMENT: he’s going on dates while engaged/married to you?!!

COMMENT: why the hell were they hanging out if she is “stalking” him? Doesn’t add up

LIZZIE: I know, he is lying we all know this, he just needs to be honest with me and stop all the lies 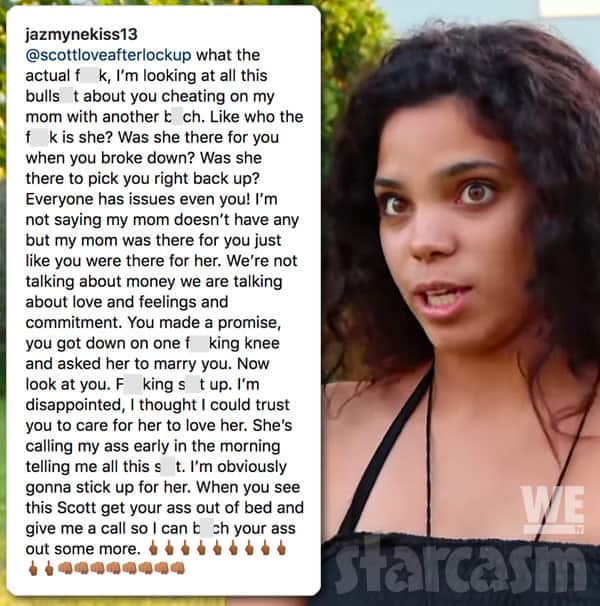 The drama comes less than a week after WE tv officially announced that they are extending Love After Lockup Season 2 from 14 to 24 episodes. That timing, combined with the fact that Scott has been in California for some time while Lizzie remained in Wisconsin, has a lot of fans suspecting that this is all just made up for their extended story line this season.

Obviously, I can’t be certain about how real all of this is, but the entire scenario is rather ridiculous and not really believable. If we apply Occam’s razor to the situation, the most reasonable explanation is that this is just all scripted drama. If that’s the case, Scott and Lizzie’s segments are going to be pretty disappointing because I don’t think either of them have the acting skills to pull off a completely made up story line.

Regardless of how real it is, here are some more interactions between Lizzie, Jazmyne, and commenters on Instagram:

COMMENT: Are you guys no longer together or it’s just upsetting to see? Either way not focusing on a man but only god can do wonders❣ I hope ur spirit gets raised

LIZZIE: we are together or I thought so

COMMENT: Please don’t make stuff up, just to have a reason to leave him

LIZZIE: why would I make this up it’s very upsetting I want answers he if you click on his picture you will see the woman

COMMENT: Lizzie… love watching your story. You’re so real and no bullsh*t. I have seen addiction first hand and experienced it myself and we are cheering you on girl! Saw that picture on his story. What’s up with that?

LIZZIE: OMG I have no clue we’re not even fighting all of a sudden a fan told me about it in and now it’s going crazy but who is this woman I have no clue

LIZZIE: no that’s his Instagram page he doesn’t use it very often but for some odd reason he has another woman on it

COMMENT: Oh wait.. it’s not posted on his IG, but when I clicked on his photo, it came up. That is CRAZY! The woman even somewhat resembles you! He has a type, THATS for sure.. LoL. I’m kidding. I think it can probably be easily explained. Simply because he isn’t that stupid. He knows how much you’re on social media and would see it immediately. There’s no way Scott would hurt you that way. He has a gorgeous female friend shown on FaceTime in one of the first episodes, so this is probably something harmless. You’re a beautiful, smart, strong woman and Scott knows he’s lucky! He wouldn’t jeopardize that.

COMMENT: I just saw her. Did you ask him why she’s on there. I know that has to hurt you.:-(

COMMENT: I’m sorry just focus on you stay positive because in the end your doing great things and I’m really hoping it was something stupid like some stupid girl hacking for attention or something I’ve just heard of alot of famous people getting hacked recently

LIZZIE: thank you for that I hope it is at 2 but I don’t know I’m not too sure

LIZZIE: I thought of that too but why do it on social media so everybody can see

COMMENT: No sex before marriage ruins it every time ??‍♂️ Y’all out here tryna live by the Bible but putting tattoos on your body.

LIZZIE: yes I know my body is my temple but tattoos also help me heal and I have an understanding with God we all send I’m not a saint but this tattoo makes me happy

COMMENT: I just looked at his story…hmm that’s crazy. Why would he just post her like that? Crazy…I’m sorry I hope it all works out for the best. Just remember to stay focused on yourself you’ve been doing sooo good!! ?

LIZZIE: yeah I have no idea why he would do that it’s like she’s hidden but yet if you click on his photo you can see her…maybe that’s why he wanted to rush back to California because he has another woman 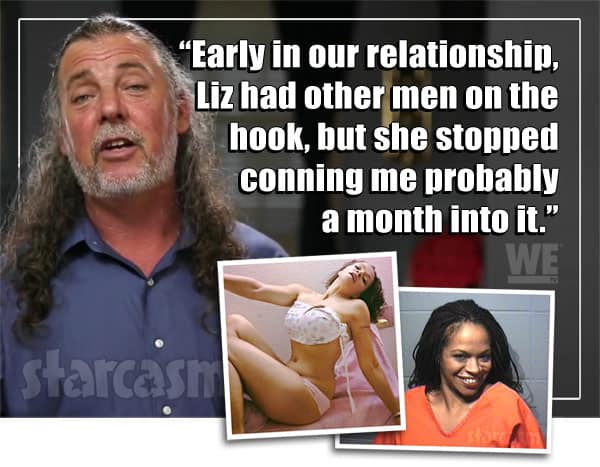 LIZZIE: @jazmynekiss13 omg, Scott was like, “who ever did this is going to pay, so his new g/f grabbed his phone and posted a photo, that’s the only way it can be done!

LIZZIE: I don’t think so, I think he has been cheating on me!!!

COMMENT: @jazmynekiss13 must you be reminded you did not want your mother with him anyways? You said it yourself you will brake them up… girl please… now you are all p*ssed off about him with another woman.. ????. My my how the times of television have changed…Oh and let’s not forget you informed America that your mother was just using him for money anyways

JAZMYNE: ?????????? you realize it’s January and it’s winter right? And in the tv show there is green grass. So think when was this filmed? Also sh*t changes people change. He WAS taking my mom away from me. I wanted to build a relationship with my mom and he wanted to build a relationship with her. That’s the past now it’s all good. I’m not saying that I’m happy with the choices that they make but everyone has issues. I’m sticking up for my mom.

So what do you think? Are we being frauded by all this Scott and Lizzie mystery woman drama? Or are they really still together living 1,500 miles apart with Scott dating someone on the side?

UPDATE – More from Scott and Lizzie:

SCOTT: The dumb-ass Set up my phone So she had all the passwords I can say I’m a dumb-ass

SCOTT: I’ve known her for a while Just as a friend .. I asked her to set up an Instagram Account I my new phone. Is pretty obvious she has a password

LIZZIE: what am I suppose to say about this, you said you were hacked, now she is a friend smh????

LOVE AFTER LOCKUP Michael arrested again, back behind bars EXCLUSIVE