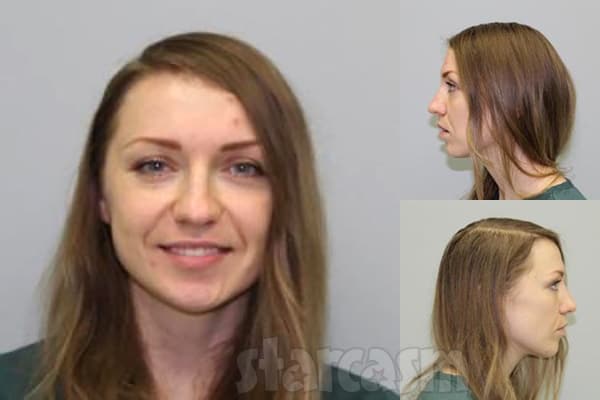 We have a positive update for Love After Lockup Season 1 star Alla Subbotina as online prison records indicate she has been released from prison again!

Alla’s status was changed to “discharged from sentence” on July 8. Her most recent mug shot photos (above) were taken less than two weeks before on June 29.

Love After Lockup fans will recall that Alla relapsed on drugs and was sent back to prison during the first season of the show. After her initial release on July 4, 2017, Alla was booked again on January 8, 2018. From our post about Alla’s initial return to prison:

According to a spokesman for the Wisconsin Department of Corrections, the department is investigating whether Subbotina violated the rules of her supervision by using illegal drugs, lying to law enforcement and leaving Wisconsin without a travel permit, among other alleged infractions.

In March of 2018, Alla’s on-screen love interest, James Cristia, appeared on the “Nation of Recap” podcast and shared an update. “OK, so the situation with Alla and I — we’re sort of taking a break right now,” James revealed at the time. “I love Alla and I will always love Alla, but I think it’s important for her to concentrate on herself for a while, you know?”

James was not willing to write off their future together completely. “That’s not to say that we won’t be together again,” he clarified. “But…I think that she needs to get healthy and she needs to prove to me [that] she can get healthy and she can get sober,” he said, before adding that Alla also needed to prove it to herself. “I think that’s a really fair way to look at it, you know? You want the best for everybody that you care for, right?”

During the podcast interview, James said Alla was serving between 24 and 31 additional months after her re-incarceration.

In November of 2018, James revealed that he and Alla were officially dating again. After confirming the reconciliation during a Q&A on Instagram, James shared a little more information. “We took some time apart,” he said, “but in the end our hearts are still attached to one another. I’m still waiting for her.”

The wait was a little more than a year as Alla was released on Christmas Eve of 2019. Unfortunately, she was booked again just four weeks later on a retail theft charge. We were not able to get the details on the retail theft charge from the courts, but a source told us that it was an outstanding warrant from an unpaid fine. The only charges listed on her current prison records are the original ones from more than eight years ago.

We broke the happy news that #LoveAfterLockup star Alla Subbotina was released from prison on Christmas Eve, but less than a month later she was behind bars again ☹️ Get the details from her most recent arrest. https://t.co/jtk9jPvKkn

Alla was transferred back into the Taycheedah Correctional Institution in March of 2020. As mentioned above, her status was changed to “discharged from sentence” on July 8. She is currently listed as being under “active community supervision” by the Wisconsin Department of Corrections.

Alla has made a couple posts online recently, one in response to her father’s happy birthday message on Facebook, and another in response to a friend of hers that passed away earlier this month. (Neither of which I felt merited inclusion here.)

Meanwhile, James appears to be on a social media hiatus. His last Instagram post was in June of last year. His most recent public Facebook post was in November of 2020 when he shared a throwback photo of his time in the Marines. Interestingly, Alla’s mother made a few supportive comments on the post.

James has expressed regret for choosing to be on Love After Lockup. That probably means that if he and Alla are together again we probably won’t be seeing their story on a new season of the show, or its spin-off, Life After Lockup.