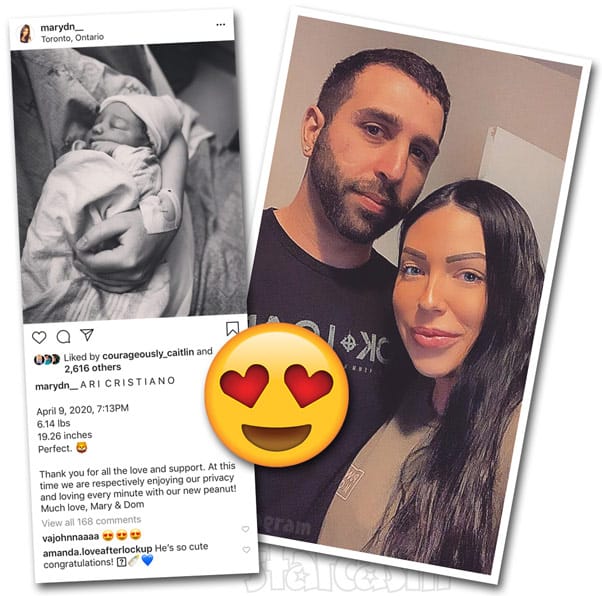 Congratulations to Love After Lockup OG couple Dominic and Mary Dalla Nora as they welcome their first child together, a boy named Ari Cristiano!

Mary shared the news on her Instagram account with a black-and-white photo of little Ari in her arms. “Thank you for all the love and support,” Mary wrote. “At this time we are respectively enjoying our privacy and loving every minute with our new peanut! Much love, Mary & Dom.”

The pregnancy announcement was two years after Dom’s release from prison after serving time for assault stemming from a brutal bar brawl in 2009.

The couple had a quickie marriage on the show, but they would follow up a year later with a full-blown formal wedding ceremony with numerous friends and family members in attendance.

Ari is the sixth child born to a couple from WE tv’s popular prison romance reality series. He joins the daughter of fellow OG couple Lamar and Andrea, who was conceived in a “prison closet” while Lamar was still incarcerated — well before Love After Lockup.

Michael and Sarah, who comprise two-thirds of the Season 2 love triangle that included Megan, also had a daughter prior to filming for the show. And, as fans are well aware, they had another daughter named Rayne after filming their first season.

Brittany and Marcelino Santiago have welcomed two children together since they first appeared on Love After Lockup Season 2. Their daughter Zoila was born on December 11, 2018, and their son was born earlier this year.