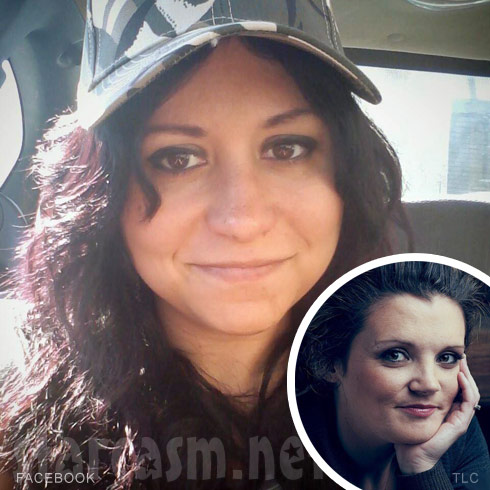 TLC’s Breaking Amish reality series has a history of stretching the truth a bit, but fans have seemingly taken their conspiracy theories a little too far of late as many are openly speculating online that Andrew Schmucker’s fiance (now wife) Chapel Peace is faking her cancer recurrence!

Return To Amish cast member Sabrina High recently came to her cast mate’s defense on Facebook pointing out that Chapel “needs all the support she can get right now” and that anyone suggesting she is faking cancer for the cameras is “a POS for even thinking that.”

This is for all who watch the show… apparently people are saying that since the show is “fake” they are daring to voice their concerns that my friend Chapel is just pretending to have stage 4 cancer. If you think that that is a legit concern, you need your head examined. You are a POS for even thinking that. How would you feel if you or someone you love had cancer and people were saying “oh you’re just pretending to have cancer” wtf is wrong with people??! Makes me sick. If you wanna judge somebody with cancer then I honestly hope someday you get to experience it for yourself firsthand and then maybe you’ll realize what a complete jerk you were. Chapel is a beautiful, strong, intelligent soul, and she is a ray of sunshine wherever she goes. She needs all the support she can get right now. She doesnt deserve to be hated on like this no wonder the world is the way it is these days what with people being so f***ing ignorant all the time.

Chapel herself replied to Sabrina’s post to thank her former Mennonite cast mate for sticking up for her:

Sabrina Thank You so much for being at my side while these terrible f**ks say whatever they plz some ppl are ruthless.. I would never wish cancer on not even my worst enemy … Sabrina Thank You for being such an amazing friend.. This show has brought me alot of unwanted attention but it has also gave me another family another group of ppl I will defend untill the END.. ❤ Chapel

I have no real doubts at all that Chapel’s cancer did return, as she described online back in September of 2013. I believe that what fans are perceiving as “fake” is simply result of Return to Amish producers doing what they’ve done so many times in the past: reenacting prior events.

UPDATE – Breaking Amish: Return To Amish star Kate Stoltz has since confirmed that Chapel Peace’s cancer remission was fake and that she believed it too.

Other events occurring on the show are happening right around Groundhog’s Day, which would put filming in late January, early February — months after Chapel would have first received the bad news about her cancer returning from her doctor. So I assume Chapel, Andrew and the rest of the cast were asked to recreate all of those scenes, and obviously these aren’t actors, so of course the scenes come across as a little staged.

And it doesn’t help that producers gave conspiracy theorists ammunition with things like having Andrew and Chapel visiting their doctor when they were actually walking into a chiropractor’s office and massage center: 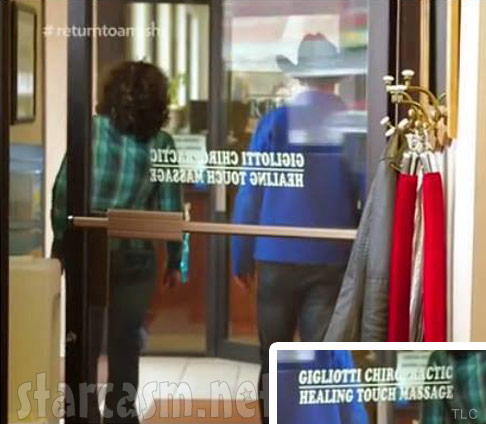 But all of that being said, I agree with Sabrina in that people are going way too far in accusing Chapel of lying about having cancer altogether. Feel free to criticize TLC and Hot Snakes Media for recreating scenes (which I think there is more than enough evidence to suggest is the case), but as far as calling Chapel out for lying, y’all need to back that sh!t up! (And I mean that in more ways than one.) 😉

Return To Amish airs Sunday nights at 10/9c on TLC.