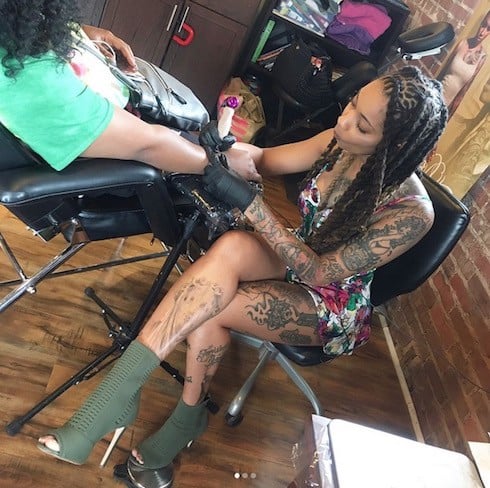 Black Ink Crew Season 5 has been a rough one for Dutchess. Her acrimonious split with Ceaser played out months before the episodes depicting them aired, so she had to go through the stress of the breakup (and attendant interviews discussing it) two separate times. Then came the report that Dutchess actually had two boos on the side while she was with Ceaser–one of them Zack Sanchez of the Carolina Panthers. Meanwhile, Ceaser was the one who got the high-profile crossover: his relationship with Love & Hip Hop Atlanta‘s Karlie Redd is set to become a major plot point for Black Ink Crew Season 6.

And, on top of all that, Dutchess has her own shop going strong down in North Carolina, almost a world away. So it’s understandable that viewers seem to have begun wondering: Is Dutchess quitting Black Ink? And it’s also understandable that–according to Dutchess herself–the answer is a resounding yes.

Miss Lattimore revealed her intentions in a recent in-depth interview with Parle Magazine. The conversation touched on all the drama of the past year before the interviewer finally asked, straight-up: “How much longer do you see yourself doing reality TV?” Dutchess noted the many different types of reality TV currently available:

That answer seemed to suggest a certain fatigue–which the interviewer was quick to note, since the follow-up question was “Well, maybe I should’ve said, ‘How much longer do you see yourself doing Black Ink Crew?’”

Oh, this is probably my last season of Black Ink Crew! I’m praying to God that he can make that possible—that he can bring that to fruition. You gotta think about it like this, nobody at Black Ink likes me; they never have. I was in love with Cease. Cease was the boss. Because I was putting Cease in a position to where he had to make some changes, if he wanted to be with me, they couldn’t deal with that sh!t. Now that I’m gone, I got everybody against me—all because I decided that I was unhappy in an unhealthy relationship. If your friends call me a bitch, I’m so sorry, but that’s an unhealthy relationship. Nobody should be disrespected by your friends; I don’t have a relationship with them. So, because I was unhappy in an unhealthy relationship, I deserve to be dragged through the mud because I chose that wasn’t what’s best for me? I’m sorry. See, the power of choices is amazing, and I didn’t think I had a choice. That’s why I stayed in my relationship for so long being unhappy. I didn’t think I had a choice. They made sure that they made me believe that I didn’t have a choice. So, you saw me on the TV, miserable and depressed—looking all f*cked up, not taking care of myself, and you wondering why? You tell me what you would do in a situation you know you’re miserable in, but they’re telling you that you can’t get out of it.

Ultimately, then, good for her. She’s right that her relationship with Ceaser brought more than enough headaches for the both of them from the rest of the crew–which is something that we’ve seen repeat itself this year once Miss Kitty stepped in and Sky stepped out (at least temporarily). And Pretty N Ink does appear to be doing well down Charlotte way. Hopefully, Dutchess won’t look back on her Black Ink years with regret or resentment, but instead finds happiness, life, and prosperity.

VIDEO Sky from Black Ink Crew got a super vagina from Dr. Miami