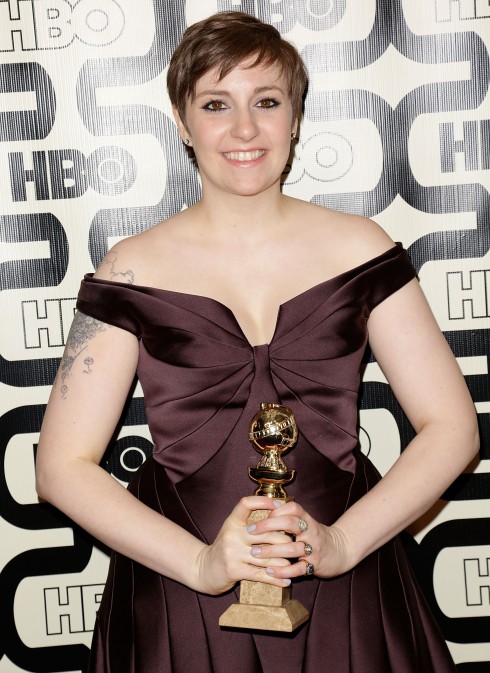 Golden Globe golden girl Lena Dunham covered the February 2013 issue of Rolling Stone magazine, and offered a little more information about who she really is.

It’s no surprise that the Girls‘ creator and star has suffered from anxiety since childhood because her character Hannah, Lena’s alter-ego of sorts, is riddled with fears, self-esteem issues, and over-analyzation, which are big indicators of anxiety.

Lena is now extremely busy working on not only Girls, but reportedly another television project, and she reportedly signed a book deal worth over $3 million. Writer-director Judd Apatow is her close mentor, and she’s got several movie ideas she’s thinking about. She hasn’t always been this frantically productive, though. When she was in college, Lena took antidepressants to deal with crippling OCD issues she’s experienced since childhood, but the antidepressants themselves left her crippled. She tells Rolling Stone‘s Brian Hiatt that they made her feel “drugged like a big horse. I was so exhausted all the time, night sweats. I was pretty fat in high school if I look at it, because it just slows down your metabolism. My mom would always be like, ‘I think you’re having a lot of side effects.’ and I’d be like, ‘You’re such a bitch; you just want me to be skinny!”

Lena’s now on Lexapro, and has Klonopin in her purse at all times, but is deathly afraid of the benzodiazepine. “Don’t ever Google a drug because it’s all psychos being like, ‘This blinded me, it killed my husband.’ I once flushed all my Klonopin down the toilet, because I was so scared by what I read. But if I feel I’m in the Tower of Terror, a little piece will just let me breathe.”

She seems to be managing her issues well now, but as a child her OCD was out of control. She was scared of going to sleep because she was afraid of death, and created a ritual with her parents of telling her three fun things they’d do the next day, and then coming to get her at exactly 3 a.m. to come sleep in their room. She also went through hypochondriac phases where she was sure she was dying of jaundice or AIDS. (I still have hypochondriac phases, so I understand.)

At some point she became obsessed with the number eight. “I’d count eight times . . . I’d look on both sides of me eight times, I’d make sure nobody was following me down the street, I touched different parts of my bed before I went to sleep, I’d imagine a murder, and I’d imagine that murder eight times.”

She also had a intense fear of sex once she learned what it was, something she manifests on the show with the awkward and demeaning sex scenes, and through the innocence of the character Shoshanna. I think it’s probably not an accident that Shoshanna’s name is so close to Hannah. According to Lena herself “Shoshanna is the part of me that was terrified of sex and felt a little bit left out of the group.”

Although anxiety can be crippling when it’s out of control, it can also be a great driver in the right doses. Hannah felt inspired to be successful by watching some of her older female relatives be, in her opinion, unproductive, mostly because of the accepted roles of women when they were young. Her grandmother was a nurse and a real estate agent, but according to Lena “She had more capabilities than she used, because of the time in history. She could have been a doctor. She could have had a bigger, more expansive, more comfortable life. I looked at my great-aunts, or whatever, who were just sitting watching TV, and was like ‘How do we ever just sit around loafing, if we’re just gonna die? How can people just take a life and waste it?'”

New My 600 Lb Life Tara before and after pics, engagement update

Did Michael Lohan’s cocaine use contribute to his heart attack?