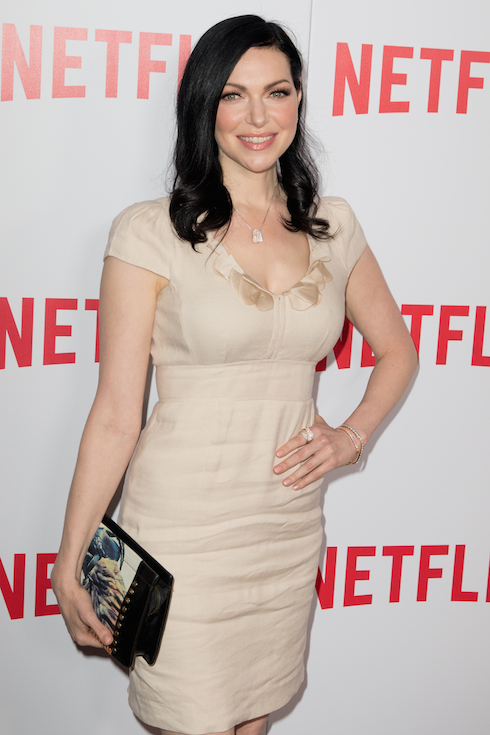 WARNING: This post has spoilers in it! If you haven’t finished the third season of Orange is the New Black, you might want to stop reading, potentially. Go finish the season; come back after.

The last time we saw Alex Vause, she was in a tight spot indeed. She spent the whole third season of Orange is the New Black in a paranoid state, worried that her former drug kingpin boss was going to send someone to kill her for testifying against him in Chicago at the beginning of Season Two. Then, her paranoia was justified in a big (and terrible) way, when one of the new part-time guards at Litchfield turned out to be her former drug kingpin boss’ top henchman, who cornered Alex in the greenhouse and pulled a gun on her at point-blank range while all the other inmates were swimming in the lake thanks to a broken fence.

Got all that? OK: The big question, then, is: Will Laura Prepon be returning to Litchfield for some Orange is the New Black Season Four hijinks? And the big answer appears to be…yes.

How can you tell? Well–there are two ways. Prepon and the rest of the OITNB crew have been doing a great deal of press these days, as the show in in the running for several major awards. The question of Alex’s fate came up more than once; here’s how Prepon addressed the issue.

To TVGuide, her response was: “[Alex] was justified in her paranoia. I think that empowers her. In Season 4, we definitely don’t see a timid side of Alex.”

And to Yahoo! UK, the answer was similar: “We can’t really say too much. [Alex is] dealing with a lot this year.”

Those responses raise a more interesting second question: In what capacity will Alex return for Orange is the New Black Season Four? Does she get shot in the head and fall into a coma? Does the shot graze her skull? Does someone come up from behind and clunk the hitman on the noggin with a flower pot? Does the gun jam? There are any number of possible scenarios. Some of them mean a full-on, healthy, ready-for-drama Alex Vause in Season Four; others mean Prepon might only be on the show (or awake) for an episode or two.

The show is tight about spoilers and leaks; we’ll probably have to wait until Season Four premieres in June of 2016 to get answers. In the meantime, Prepon has also been updating her Instagram on the regular with photos from the set. Have a sampling!

Looks like I’m about to flash my hair and MU girls. Let’s keep things interesting here on a Friday night! #Oitnb #alexvause #fridaynightlights

Rockin’ my @23rdbaron white tank on set today! Maybe I get them to swap out our prison issue ones for these. 😉 #oitnb #alexvause A photo posted by @lauraprepon on Jul 15, 2015 at 8:02am PDT

Glasses✔️Eyeliner✔️Badge✔️ …excited to get out there and make an awesome season for you guys! #season4 #alexvause #Oitnb #bestfansever

Feeling the love from these beautiful people! #orangecon #alexvause #season3 A photo posted by @lauraprepon on Jun 11, 2015 at 4:18pm PDT

Is Britney Spears going to be on Orange is the New Black?