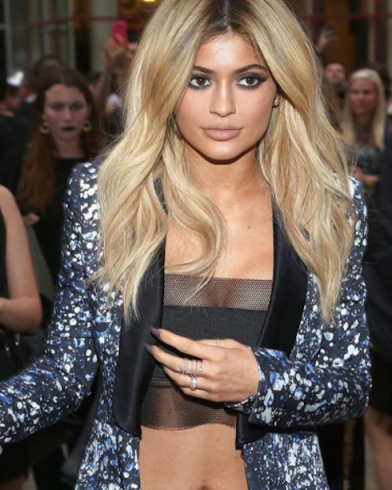 What is Kylie Jenner’s net worth? The surprisingly high figure is bulging, thanks to Kylie Jenner’s increasingly high-profile actions. Though her value was about $4 million just six months ago, her total value has skyrocketed in 2015, thanks to an ongoing and increasingly lucrative number of endorsement deals–and, in the wake of her 18th birthday, a slew of high-profile appearances, complete with fat appearance fees.

According to the latest reports, the Kylie Jenner net worth has increased by a whopping 25% in just six months. The 18-year-old reality TV star and budding fashion mogul is now worth a cool $5 million. Given that Kylie Jenner’s fashion line has only just begun rolling out, though, there’s reason to believe that figure will jump considerably by year’s end, and that profits will continue to soar into 2016 and beyond.

Where does Kylie Jenner’s money come from? Her initial fortune was based on Keeping Up With The Kardashians earnings, which, so far, have come in at a reported $5,000 per episode. The last three seasons of KUWTK have averaged 20 episodes, which means Kylie’s pulling in a sweet $100,000 per season. Those numbers, though, don’t reflect the far sweeter $100 million deal Kylie’s family signed with E! a few months ago, which will keep the Kardashians on the air for four more years. There’s no word yet on how much Kylie Jenner makes based on those new figures, but you can bet she’ll be seeing a pay raise–unless she decides to bolt and start her own reality TV show. 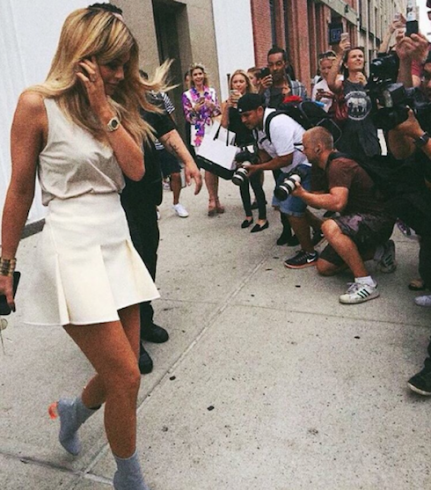 Kylie Jenner also makes at least $3,000 per tweet. Why “at least”? Because that’s what she made all the way back in 2013. It’s entirely possible she makes more–as much as two times more–for tweeting now.

The Kylie Jenner net worth really jumps, though, when you consider the huge number of product placements she shares on social media. She has one of the largest and most loyal Instagram followings in the entire world, and isn’t afraid to exploit those 35 million followers to the tune of serious endorsement cash. Here’s just a sampling of the major plugs that have contributed to Kylie Jenner’s net worth over the past five days alone:

@alexanderwangny show was DOPE. Time for a much needed girls night A photo posted by King Kylie (@kyliejenner) on Sep 12, 2015 at 9:10pm PDT

wow I love my new silk rug from @mansourmodern thank you Benjamin and @jeffandrewsdsgn. My bedroom is looking perfect ?.

So excited to be in NYC this Wednesday to celebrate the Grand Opening of the new @thesugarfactory in the Meatpacking District – come say hi! A photo posted by King Kylie (@kyliejenner) on Sep 10, 2015 at 10:13am PDT

girls nail night at the house with @nailbarandbeautylounge

Just about to head out for a morning walk before my interviews and I love a little extra help. Thank you @premadonna87 and @waistgangsociety for my waist trainer I’m officially obsessed after seeing how bomb my sisters look. It also helps with my posture :). Get yours at whatsawaist.com A photo posted by King Kylie (@kyliejenner) on Sep 8, 2015 at 12:06pm PDT

Everyone always wants to know what lashes I wear. My favorite are @LillyLashes ? Today I’m wearing 3D Style “Miami” Check out their glam lashes at www.LillyLashes.com ? #LillyLashes

Plus, let’s not forget that Kylie Jenner was paid $200,000 by a Canadian club to appear at her own birthday party. If that’s Kylie Jenner’s appearance fee, then we know she’ll be banking another $200,000 to appear in New York at the venue advertised above this Wednesday night. By comparison, former President Clinton received an average of $193,000 for all the speeches he gave between 2001 and 2013. It’s therefore possible that Kylie Jenner’s appearance fee is higher than–or is at least on par with–that of one of the most sought-after speakers in the Western world. Nice work, if you can get it.

Now that Kylie Jenner’s fashion and beauty lines have just launched, industry experts expect her value to climb quite a bit higher. Her lip kit line, combined with the just-announced ambassadorship for beauty line Nip + Fab, and her ongoing position as a PacSun sales clerk all promise to keep Kylie Jenner’s net worth sky high.

Kim Kardashian flour bomber is PETA activist Christina Cho, her sister was on Keeping Up With The Kardashians