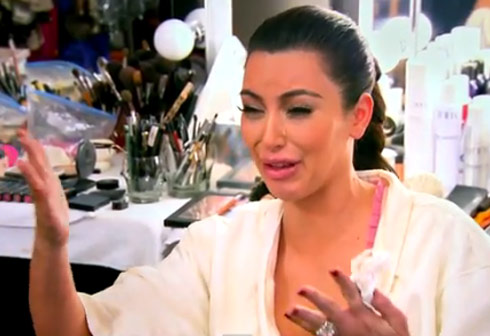 As tears of makeup darkness trickled down the countenance of Kim Kardashian’s face last night in the season finale of a couple of those K gals take a city show, we have instant news on the Kim K. front. Is this a surprise? Of course not!

We all knew there would be some “Kim in the headlines” situations conveniently following up last nights’ “Kris moves boxes around while Scott Disick transfigures into the Buddha of relationship reasoning” closer to the Kim splits from Kris plot line. You know even with Kourtney putting Kim on repeated b!tch blast and Kris waxing philosophically about his future the real victims in all of this were Humphries’ boxes of stuff. Those poor packaged squares didn’t know where to call home, with most of ’em eventually ending up in some storage facility. Tragic, really.

But life moves on even if boxes don’t so lets see what Kim’s big publicity follow ups were, intentional or not.

First up we have Kim’s own response which was actually no response at all but instead a Twitter idea out of holy left field. The reality star wants to start her own Bible study group! Who’s in!?! Anyone… Bueller… Anyone?

It seems so sincere when posted next to an image of Kim appearing near topless with her arms hinting at some nip coverage. All kidding aside, to each their own and I’m sure if Kim does start a Bible group that in just a short few months Los Angeles will have a new mega church.

In all fairness Kim did tell a follower that she wasn’t sure if she could watch the finale stating, “Makes me sad reliving this. Not sure I can.”

Millions will have an opinion about this as is usually the case when it comes to these Kardashians. While Disick became the family relationship counselor I can turn but to one celeb when it comes to matters of the heart or matters of the weed and that would be S-to-the-N double-O G. Ahhhhh yeah boyeee, Snoop Dogg chimed in a while back about Kim Kardashian and her short lived marriage to baller Kris Humphries and, well, it’s Snoop Dogg who’s been keepin’ it real for decades now.

Yo, Snoop – hit us with the 411! (Parental Advisory for explicit language in effect):

In one other piece of what’s up with Kim, a man arrived at her pad over the weekend unlike Kris’ sad boxes and informed security he was there to stay with Kim and that she had flown him in. This wasn’t true and it freaked the reality star out a little bit so she called the police. No word yet if any charges were filed or if any tabloid has come out with a story claiming that Kris Jenner set it all up.