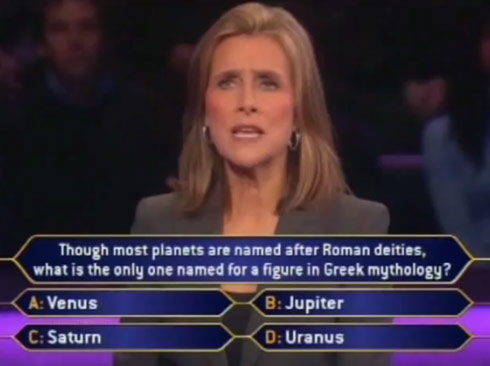 The planet of Uranus has been the catalyst for a million bad jokes and puns through the years.  I’ve ran with “there are Klingons on Uranus” so many times my better half has threatened to pop me if I utter that phrase again.  Well she may poo-poo on Uranus but I’ll show her by showing you this wonderful clip from Millionaire that involves a perfect though unintentional Uranus joke delivery by a contestant.

The question posed to our lady by host Meredith Viera is this:

Q: Though most planets are named after Roman deities, what is the only one named for a figure in Greek mythology?

And here is the contestant’s response as she talks through her options:

Rebecca: Jupiter is Roman I believe.  I can’t even put a finger on Uranus.  That’ll be edited I’m sure.  Okay, I didn’t mean to say that on television.

Meredith: You know Rebecca I really need this job.

What I love almost as much as, “I can’t even put a finger on Uranus” is the fact that she went with Venus and the correct answer was Uranus that she couldn’t finger!  May we all be open to the world with the innocent hearts of babes and may Uranus jokes always be funny to me.

Experimental video made by James Lee, the armed hostage-taker at Discovery Channel for a show to be called Race To Save the Planet